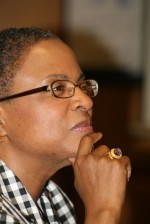 A third-generation preacher who founded a United Church of Christ congregation in San Francisco will keynote the 3rd Annual State of Black Gay America Summit during Black Gay Pride in Atlanta next weekend.

Rev. Dr. Yvette Flunder, the senior pastor and founder of City of Refuge United Church of Christ, headlines the day-long series of speakers and panel discussions. The summit brings together local and national leaders to discuss critical economic, social and political issues facing gay African-Americans and comes during the six-day pride celebration that draws tens of thousands of people to Atlanta each Labor Day weekend.

Black Gay Pride opens Sept. 2 with a candlelight vigil; the summit is set for Sept. 5.

“This year, we will clearly define issues of importance to our community and develop a strategy to chart the way forward,” Gregory Allen, president and CEO of Xtreme Entertainment, primary sponsor of the SBGA Summit, says in a prepared statement. “Building partnerships with potential allies is critical to advancing our agenda and ultimately achieving our goals.”

Flunder founded City of Refuge UCC in 1991. In June 2003, she was consecrated Presiding Bishop of Refuge Ministries/Fellowship 2000, a multi-denominational fellowship of more than 50 Christian leaders and laity representing churches and faith-based organizations fro across the U.S. and Africa. She has served as a consultant to the Centers for Disease Control & Prevention, the Congressional Black Caucus and the U.S. Department of Health & Human Services.

She has also received several awards for her work on HIV issues. Her first book, “Where the Edge Gathers,” was published in 2005.