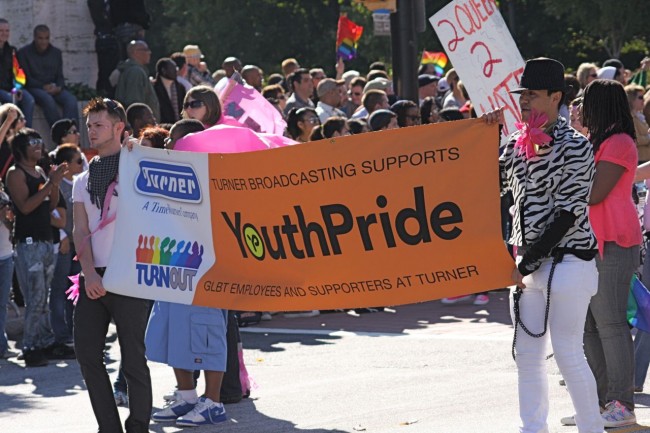 A drop in donations and grants prompted a financial crisis at YouthPride that resulted in the non-profit “temporarily furloughing” three of its six staff members.

The three employees – all former participants in YouthPride programs turned volunteers who were later hired – were furloughed for more than seven weeks beginning last Friday due to the organization’s cash crunch that may also imperil other aspects of its operations and programs.

“It comes down to the point that non-profit giving is down and we are finally feeling it,” says Jordan Myers, president of the YouthPride board. “We haven’t been able to get the money in from our grantors and donors. I’m pretty amazed that we have been able to hang on this long. Our key mission is to not fold.”

But with the cost to keep YouthPride’s doors open at roughly $1,000 per day, the organization is also struggling to pay rent and utilities for its Edgewood Avenue offices. The group’s board has cut the annual operating budget about $70,000 to $280,000 and the furloughs were one step in a financial belt-tightening plan, though Myers declined to discuss other measures YouthPride may take to reduce costs.

“Our plan is to definitely pay our rent. It’s our plan to do so assuming the funds are available and coming in. Like every non-profit out there, we are struggling to find our money,” Myers says.

McPhaul and Boren, who did not respond to calls requesting comment, also face a reduction in salary, though Myers declined to offer specifics about their compensation.

McPhaul, in an email to volunteers, says the organization’s programs will continue and blamed the furloughs on a drop in donations.

All programs will continue as scheduled. Some staff have been temporarily furloughed because we are in a cash crunch, but we don’t want it to become a permanent break. You should have received an email earlier today through Whentohelp.com from Manny, however, I constructed and sent that email to volunteers requesting help covering some shifts.

No formal communication had gone out to volunteers because we wanted to inform ALL staff, including those out on sick-leave, of the details first.

The furlough is “TEMPORARY” so that we can gain better financial traction. This has been a tough year for many non-profits. Our loyal donors have been impacted by the economy and have not given like in years past. Also, some regular grants that YouthPride received in the past were reduced by grantors; subsequently, the reductions showed up on this year’s balance sheet.

The board decided to embark on a different strategy that has been underway for several months. Following this plan will enable us to build a stronger YouthPride. Grant-writing, and other fundraising has been ramped up. 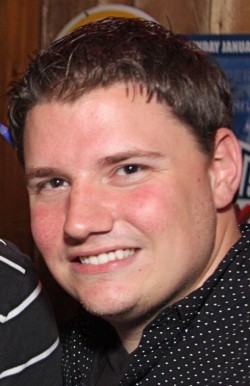 Rogers, Dotson and Moss expressed disappointment in the furloughs and concern over the stability of YouthPride’s programs until their positions are restored.

“The whole situation has left me completely dumbfounded,” says Rogers (second photo), a former youth in the organization’s programs who became a volunteer coordinator in 2008 and a paid staffer in October 2008.

“Even if the furlough is temporary, I was extremely saddened to have been asked to leave my position. After all, YouthPride has been such an important part of my life for almost four years now,” he adds.

Dotson (third photo) says he wants to return to YouthPride in some capacity, if not to his fulltime position after the furloughs are lifted. 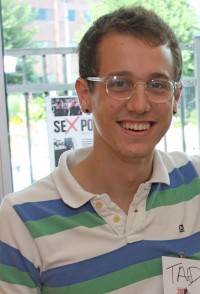 “We are more than likely going to be asked back as soon as YP finances are stable,” Dotson says. “It could be that in that time some of us will have moved on to other things, but certainly we will all still be involved with YouthPride in some capacity. It’s a cause we love and even with some management issues or financial blumpkins there are so many wonderful services at YouthPride that are not directly affected by these screw-ups.”

Moss learned of YouthPride as a gay teen growing up in Roswell. She started attending meetings and discussions groups in 2006 and later met her current roommate and several friends through the organization.

“I’m just disappointed about the financial situation,” Moss says. “They provide some pretty good services to the people who go there. I want the center to stay open.”

Chase Tucker, outreach coordinator for the organization’s youth board, says they weren’t told of the financial troubles and furloughs until after they took place. The youth board met with YouthPride’s board Monday for nearly three hours.

“We’re really upset the board did not tell us what sort of debt we are in because we would have started fundraising,” Tucker says. “These people are huge to us and to lose them is detrimental.”

YouthPride board members said during the meeting Monday that volunteer efforts will be ramped up to help compensate for the staff reductions. But Tucker says she and other youth are concerned that the programs will suffer with the furloughs. 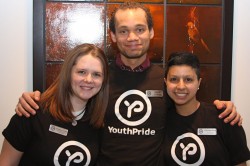 “Basically, YouthPride is broke and we don’t have any money. I honestly think the center is gong to go through some really tough times in the next six to eight weeks,” says Tucker (bottom photo, left).

The financial difficulties continue a tumultuous year for the 14-year-old organization. Last spring, Executive Director Woodrow Leake left his post as he faced a charge of simple battery after allegedly accosting a female volunteer.

But Myers says the organization is shifting its strategy for seeking grants from short-term, smaller gifts to focusing on larger, multi-year grants. The organization is also counting on the success of increased solicitation efforts to attract individual donors to fill its coffers early next year so it can end the furloughs, Myers says.

“We have a lot of direct asks that are out there and new donors have committed to funding, but they have committed for January and February instead of December. There are also our first-time grants that are hitting in January. We are planning on them coming, but I don’t want to give false hope,” he says.

YouthPride already benefits from strong support from other non-profits, including the Atlanta Bucks Rugby Football Club’s Purple Dress Run and For the Kid in All of Us, which hosts the Toy Party. Both organizations include YouthPride as a beneficiary.

In early April, YouthPride benefited from a posh fundraiser at the Bill Lowe Gallery and has held other events, including drag bingo, during the year. In November, the YouthPride entry won first place for best non-profit float in the Atlanta Pride Parade (top photo).

On Thursday, YouthPride hosts a Holiday Open House. On Sunday, Atlanta Freedom Bands hosts a holiday concert benefit for the youth group, while a group of board members and LGBT leaders hosts a Bi-Partisan Dinner Party benefiting the organization on Dec. 29.

Tucker says the youth board is also looking to organize fundraisers to help bolster the group’s finances.