Your weekly peek at David Atlanta 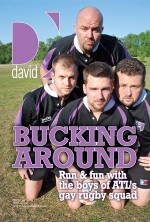 The boys of the Atlanta Bucks Rugby Football Club grace the cover of David Atlanta this week in a plug for their big purple fundraiser.

It’s actually the Purple Dress Run, the event in its third year that raises money for the gay rugby club and YouthPride. The key to completing a 5K walk/run while stopping at three bars along the way? Lots of water, event organizers say.

There’s also Ryan Lee’s thoughts on what cell phones say about their owners, Topher Payne on the big impact of small talk and Michael Jeffrey on the opposite ends of the spectrum of love. There’s also a handful of photo pages, including one with cute guys from the Dogwood Festival. So many cute guys, in fact, you might think it was Pride and not the arts festival.

Our pick for the Bitch of the Week:

Bitch, don’t look toward my way in a bar without speaking, and then add me on Facebook a few days later. You had a chance to be my “friend” and you blew it.