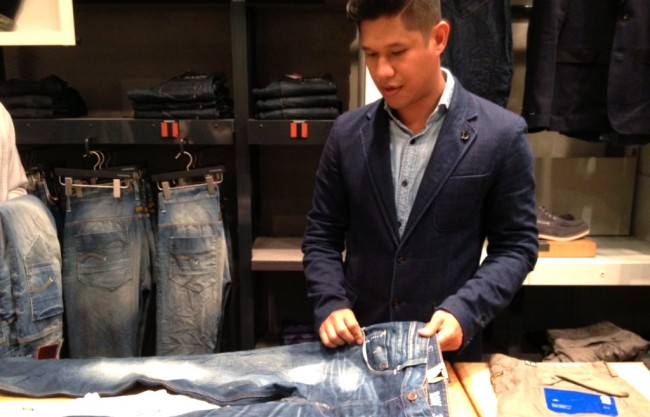 In the year since the gays did nothing to help save Atlanta from a GQ worst dressed cities ranking, one of our favorite place for fancy pants, Standard ATL, just inked a bigtime fashion deal. Standard’s Farshad Arshid, formerly of the Versace boutique at Phipps and currently king of Standard ATL at Lenox, has long been hard at work trying to change that image, one designer-jeans covered hot ass at a time. Now he’s secured a Q-Store-in-a-store from the European high-end denim brand and gay fave G Star Raw. What does that mean to you, dear shop-a-holic queens? Bigger is better, of course. And by that we mean more square footage, more space for the menswear chic Arshid’s shoppers already love, and of course, way more of the G-Star brand, according to the Fashion List.

This marriage of the luxury denim brand from Amsterdam & the on-trend shopping destination in Atlanta marks the G-Star brand’s third Q-Store. G-Star introduced the Q-System in 2008 allowing retailers to adopt a shop-in-shop concept incorporating G-Star designed furniture & apparel within a minimum area of 200 square feet. Standard ATL upped the ante by expanding their current store’s square footage & implementing a Q-store which is comprised of 50-65% G-Star merchandise with the remaining retail space comprised of non-competing brands. Located in the popular Lenox Square Mall, (anyone who has ever shopped in the South should know Lenox) the standout store displays an impressive amount of chic menswear with a dash of women’s denim & ready-to-wear with a healthy offering of casual kicks. The well edited retailer knows what sells in this southern state & is banking that consumers will all be donning G-Star jeans, button down campers & light-weight leather lettermans soon enough.

Slip that news up over your booty in the dressing room the next time you’re in need of some retail therapy. Photo by Ben Rose Photography via The Fashion List