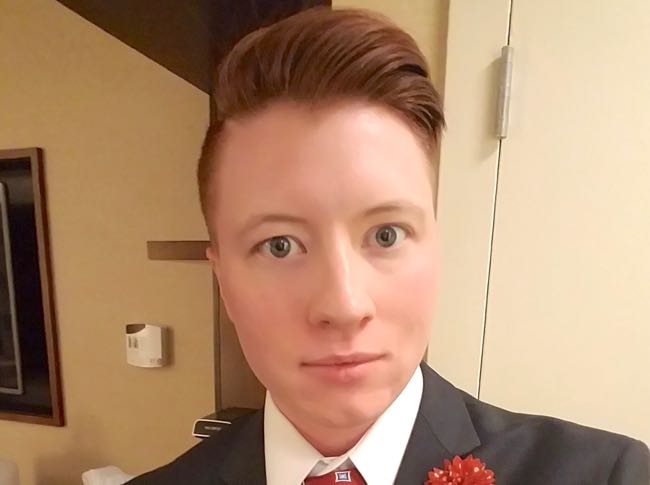 A young transgender man who took on a Georgia judge who called his name change offensive – and then won in court – has died after complications from surgery.

Rowan Feldhaus, 25, died after complications surfaced in the wake of a May 4 surgery that was part of his gender transition. Feldhaus suffered septic shock after a hysterectomy and lost oxygen to his brain, according to WRDW. He was hospitalized at Augusta University Medical Center.

Lambda Legal, which took on Feldhaus' case in his court fight over the name change, confirmed his death Tuesday. Beth Littrell, who represented Feldhaus for Lambda, called his death a “tragic loss.”

Our hearts are heavy at the tragic loss of a courageous young man who fought for the right to determine his own name and destiny. An Army reservist and a student, Rowan’s grace, quiet dignity, strength and self-assurance were an inspiration to me and many others who heard his story.

We represented Rowan, along with Andrew Baumert, in a successful Georgia Court of Appeals battle to ensure he had the right to change his name to reflect his gender identity.

After having been discriminated against by a judge who refused to allow him to change his name because he was  transgender, Rowan wanted to make sure that no other transgender person was  similarly insulted and objectified. Because Rowan stood up, Georgia judges are now required to allow people to change their names without bias.

We offer our deepest condolences to Rowan’s family and loved ones during this difficult time. We will honor Rowan’s life by continuing to fight discrimination in all its forms against transgender people.

At only 25 years old, Rowan was taken from us too soon, but he left a legal legacy that will live on and help others for many years to come.

Feldhaus started the process to change his name in July 2015 to help align his legal documents with his identity. At a hearing in February 2016, Feldhaus provided the information needed for the name change, Lambda Legal said, but Superior Court Judge J. David Roper refused and said the name change might offend the “sensibilities and mores” of Georgians. A month later, Roper rejected the name change.

Lambda appealed the decisions to the Georgia Court of Appeals, which overruled Roper in both cases in January.

Georgia Equality honored Feldhaus during its 12th Annual Evening for Equality in June 2016.

UPDATE | Georgia Equality applauded Feldhaus for fighting back against injustice in a statement released Wednesday. Feldhaus recently became a member of the organization's board.

His willingness to stand up and push back against injustice in his pursuit to live his best life will continue to be our inspiration as we reaffirm our commitment to fighting for LGBT equality in Augusta and across Georgia. Though Rowan is no longer with us, the impact of his courage will continue to be felt by transgender and other gender non-conforming individuals in our state for many years to come. We are grateful for his work, and grateful we had the chance to know him.