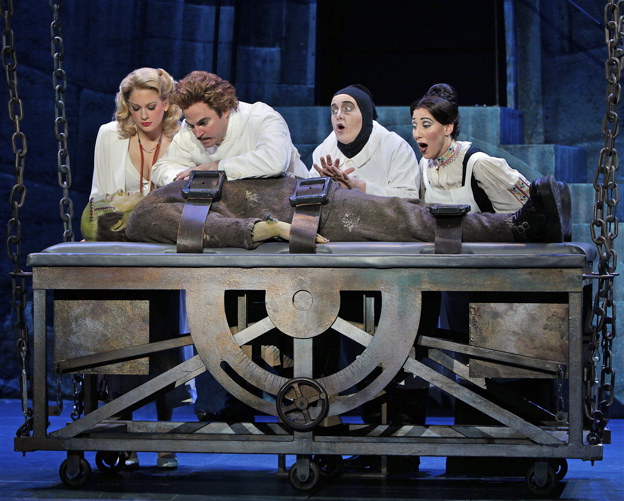 After seeing “Young Frankenstein” on Broadway a few years back, gay performer Stephen Carrasco knew he wanted to be part of the production—and now he is. The show opens in Atlanta Tuesday.

When Broadway Across America brings the musical to the Fox Theatre this week, Carrasco is part of the large ensemble.

“Young Frankenstein” (top photo) is based, of course, on the 1974 Mel Brooks film, itself a spoof on Mary Shelley’s classic novel. The performer says it stays pretty close to the comedy, with Frederick Frankenstein inheriting a castle in Transylvania and deciding to resume his later grandfather’s experiments on the dead.

As an unemployed chorus boy, Carrasco (second photo) got the chance to see “Young Frankenstein” from a place he normally wouldn’t—front row and center—after winning a lottery. He had seen Mel Brook’s “The Producers” and liked it, but he says nothing compared to seeing the original cast, which included “Will and Grace’s” Megan Mullally, up close.

“I’ve never laughed so hard,” he says. “I think people who like the movie will like the show. Each is wonderful in its own way.”

Carrasco has been on the tour for approximately five months now and says the touring version is as potent as the original, which bowed in New York at the end of 2007.

“Things are just as big on the road as they were on Broadway,” he says.” We keep it extravagant. There is stuff flying all over the stage.”

Carrasco calls “Young Frankenstein” a show for the common man.

“This isn’t a typical musical theater piece,” he says. “You don’t have to know Stephen Sondheim to appreciate this. It’s a lot of fun and people laugh wherever we go.”

But being musical theater, it is filled with song and dance and “great looking guys,” the performer laughs. Irving Berlin’s “Putting on the Ritz” is the musical’s big number, he says.

The “Young Frankenstein” national tour is unique in that in keeps two of the major actors from the original Broadway musical: Roger Bart (the murderous pharmacist on “Desperate Housewives” and Carmen Ghia, one of the “Keep It Gay” guys in “The Producers”) as Dr. Frederick Frankenstein and former Atlantan Shuler Hensley, himself a Tony winner for “Oklahoma!,” as the Monster.

“I learn a lot from working with these guys,” Carrasco says. “They put their own spin on the roles.”

Carrasco was in Atlanta a few years ago with Theater of the Star’s version of “White Christmas” and had a great time in the city.

“I love the bars in Atlanta,” he says. “There are so many. And the Fox is an amazing place to perform. I am looking forward to coming back.”