You Atlanta gays are so sloppily dressed 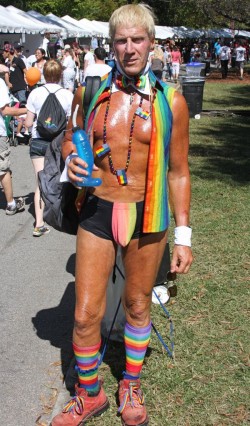 Listen up, you fancy t-shirt wearing gays: You and your ilk helped land Atlanta smack dab in the middle of a long list of the nation’s worst-dressed cities. It’s one more indignity for us to suffer.

When the style mavens at GQ came through Atlanta, it must have been during Pride (photo). That’s when the city’s usually-dapper gays lose all sense of fashion and parade about in denim, Spandex and worse.

Clearly, the magazine’s taste masters didn’t bother to peek in at one of those upscale Atlanta Cotillion events, spot the well-dressed when Jerusalem House goes to Buckhead, gaze at the holiday-themed garb of the Toy Party or enjoy the put-together crowd of Takeover Atlanta.

No, they focused on the t-shirts. For that, Atlanta was ranked as the 17th worst-dressed city in the U.S., between Austin and Santa Fe. Ouch.

The magazine spared nothing with Atlanta’s ranking:

Atlanta is the Mecca of the promotional T-shirt. Everyone is a CEO or founder of a record label or a clothing line you’d have never heard of if it weren’t plastered in size 96 Helvetica font on their chest. The pleats in Atlantan’s pants are deeper than the Chocolate Rain kid’s voice and their blazers look like hand-me-downs, because they are hand-me-downs. In the A, there is nothing wrong with wearing uncle Ned’s seersucker suit to the shindig in October—fit, be damned.

You’d think a city so well populated with gays could rank a little higher when it comes to fashion. But, with apologies to Boy Next Door, Drew Lewis and the well appointed crowd at Blake’s, we’re a little sloppier than we’d like to admit.

As if going from the “Gayest City in America” to No. 7 wasn’t enough. Or Lady Gaga making us drive to Gwinnett where gay teens go to die. But hey, at least we’ve got Ben Cohen. And we’re not Nashville.