There was no hold-back on the feedback for Project Q posts this week, especially when it came to another YouthPride ousting, the Eagle 8, crime stories, “Idol” recaps, and UGA’s peanut butter covered fan. Be heard under each post, on Facebook and via Twitter.

Lynn Boren, one of two executive directors at YouthPride was terminated last week, continuing a staff shake-up that started more than a month ago with the furloughs of three staff members. (Photo: YouthPride contingent in the 2009 Atlanta Pride parade)

“I hope that this will be the last hard thing that they have to do to keep the program afloat. I’d hate to see if disappear. These kids that need support more than anyone shouldn’t lose their place.”
–Shannon Lynn Hames

Re: Eagle 8 trial postponed until March 11

The on again, off again trial for the Eagle 8 is off—again. The eight men arrested in the Sept. 10 raid on the Midtown gay bar won’t get their day in court until mid-March. (Photo: Eagle owner Richard Ramey)

“Nothing says Atlanta, the gayest city in the nation, cares more about LGBT equality than showing up and witnessing the hearing for the Eagle 8.

The Eagle 8 NEED the community’s support for these absurd underwear charges to be dropped.”

Re: Cross-dressing teen fends off rape in Athens

A 17-year-old cross-dressing man fought off an attempted rape after being dragged into the woods Sunday evening in Athens by another man, police say.

“Why do people have so much hate in their hearts?”
–Tiffany Dasilva

“Because people fear what they don’t understand and hate what they fear.”
–Travies Marvell Mims

Re: Conviction upheld in grisly Buckhead slaying
The Georgia Supreme Court on Monday unanimously upheld the murder conviction and life prison sentence of an Alabama man who took part in the brutal 2002 slaying of a gay travel agent in his Buckhead condo.

“For once, the courts got it right.”
–Jim O. Brams

Re: UGA student: I’m too sexy for this peanut butter 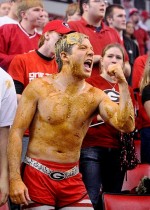 UGA basketball fans, no doubt joyous with their mediocre team’s upset win over SEC rival Tennessee on Sunday, celebrated like most college fans: They rushed the court. Except one shirtless cutie, who slathered himself in peanut butter first. (Photo via Athens Banner-Herald)

“Got to love how he belts the outfit…”
–Lanny Word 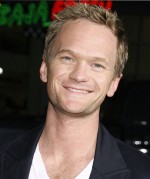 As we hurtle through the mass auditions—with guest judges like Neil Patrick Harris (photo), Katy Perry, Avril Lavigne and a Jonas Brother—toward Hollywood week in the studio with Ellen finally coming on board, columnist Collin Kelley hilariously recaps each episode of “American Idol,” Season 9.

“I still don’t quite get this Ryan Seacrest is gay/not gay schtick going on in Idol… makes the whole thing so juvenile.?

Collin, you are sooooooooooooo funny! Love your recaps, which are way better than the show!”

“I loved Neil Patrick Harris as the guest judge last night. I could have done without the Jon-ass bro all together.

And yeah, the fake squabbling was apparently inserted to add some interest and waste some time, but it didn’t get on my nerves half as much as Kara Dia-shutdafuckup does all the time…thanks for the snickers.”