There was no shortage of feedback for this week’s Project Q posts, especially when it came to Vernon Jones, the Eagle 8, Atlanta as the gayest city, Charis changes, and our ever-popular Morning Fix. Let us know how you feel via Facebook, Twitter or the comments section under each post, and see if your thoughts make next week’s list.

Re: Vernon Jones is back; his LGBT record still stinks 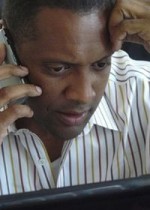 Vernon Jones (photo, via Sunday Paper) and his lackluster record on LGBT issues is back, and the mercurial former DeKalb County CEO wants to unseat one of Georgia’s most gay-friendly members of Congress, Hank Johnson.

“Methinks Mr. Jones is always a little Down and Low when it comes to GLBT issues.”
–Zak_ATL

“No thanks! ?I’ll stick with Hank. He’s such a good man, and loyal public servant.”
–Tim Cairl

“Some folks don’t know when to just quit!”
–A. Allen Renshaw, Jr.

The trial of the eight men arrested during the Atlanta Police Department’s Sept. 10 raid of the gay bar has been postponed, another delay in the legal case that has entered its fifth month. (Photo: Eagle co-owner Robert Kelley)

“WTF? Is the city hoping this will just disappear?”
–Lee Pigliavento

Re: Weird Science: Is Atlanta the gayest U.S. city?

The next time we bitch about how Atlanta’s gay nightlife is dying, we can cite a subjective “study” in the Advocate that names our fair city the “gayest,” based mostly on a preponderance of gay bars—among other random factors. We’ll take it, but we question the “study methods.” (Photo: 2009 Atlanta Pride parade)

“Is Atlanta the gayest city in the U.S.? Project Q Atlanta provides an interesting deconstruction.”
–QuandarySmith via Twitter (One of nine retweets for this story alone. Follow us.)

A “revolution” at the feminist non-profit Charis Circle includes the departure of both co-directors and venerable Charis Founder Linda Bryant (photo), as well as an earnest, immediate search for an executive director. The board chair gives us the low-down, and Bryant expresses a lot of gratitude for the past, as well as hope for the future. 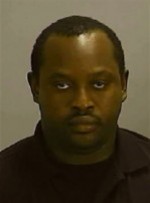 This story has a life of its own. Two weeks after its original post, comments are still coming in. Randolph Forde’s teaching career in Clayton County ended Tuesday, three months after he was arrested for allegedly putting a hit on a student he thought was gay.

“It took three months to remove this psycho bully from a position of authority over children? WTF?!?!”
–Justin Time

“I wouldn’t be embarrassed if I was your wife, sweetie.?I’d be f-ing mortified and filing for divorce.?

It really galls me that a female teacher here was instantly fired for using the word “bitch” on her private Facebook account yet it took three months to can this guy for harassing a student, threatening said student with physical violence, and worst of all, offering to pay another student to kill said student.??

This damn well better go to trial. If the allegations are true, losing his job should be the least of his punishment.”

“It’s about damned time and I pray the kid gets enough money to pay for his college education, his partner’s college education, the Mercedes and the Jag… This kind of bigotry must be snuffed out now. A “teaching professional?” I think not.”
–Kevin_Atlanta 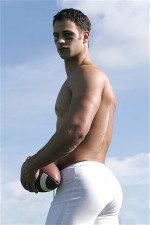 Apparently, it’s not enough to just look. Each of the guys in our daily fix of manflesh inspires you to pound that … keyboard. These are just a few of the SafeForWork comments. We are omitting the last names on this one to protect your viewing habits and private tastes. (Photo: Tuesday’s Brian Hawn)

“Andy S. is bringin’ the Woof Fierce back!”
–Allen

“One of the most spectacular butts I’ve ever seen!”