The conversation got heated this week when it came to Senator Chambliss on “Don’t Ask, Don’t Tell,” Falcons’ Ovie Mughelli on gay rumors, and the continuing saga of two Atlanta LGBT newspapers. Let us know how you feel via Facebook, Twitter or the comments section under each post, and see if your thoughts make next week’s list. 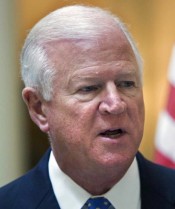 Just how much of a homophobic bigot is Saxby Chambliss (photo), the senior senator from Georgia? Take a look at his comments Tuesday during a hearing on the military’s ban on openly gay soldiers. He expressed concern that repealing “Don’t Ask, Don’t Tell” would cause a host of problems and “create unacceptable risk to the armed forces.”

“No, Senator, you are an unacceptable risk to this nation with your backward-ass thinking.”
–David Carmichel

“Can you say ‘pander to your base’?”
–Rebecca Frye

“If it was the 1950s he’d be against segregation, it’s what keeps him in office with his voters.”
–Greg Dillard

“Whatever… does he not think that there are gays already serving in the military? How does he get re-elected over and over again?”
–Whitney Johnson

“Lets ban together and get these people out of office, then get someone in who has intelligence and the ability to rationalize thought and ideas.”
–Deryl Richardson

“I’m so embarrassed to have him as my senator. What a douchebag. I hope I get stuck in an elevator with him one day…”
–Shannon Lynn Hames

Re: Falcons’ Ovie Mughelli: Calling me ‘gay’ is an insult 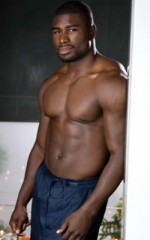 Atlanta Falcons fullback Ovie Mughelli (photo) has come out firing against web-based allegations of a years-long gay romance, threatening legal action against sites that publish details “for damages for defamation and false light.” The juicy details, and how Lambda Legal is fighting back.

“Calling him gay IS an insult–an insult to gays!”
–Lee Pigliavento

“Thou doth protest too much.”
–Dave Hronek

“Lord, let me out some of the NFL players I know that get down.”
–Joshia Carter 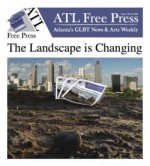 And you thought the Grim Reaper’s Gay Media Deathwatch in Atlanta was over. Not so fast. The first newspaper to hit the streets in the post-Southern Voice era is on life support. Or dead depending on which report you read. The folks at Atlanta Free Press want to hit the restart button after only four or five issues.

“HA!!!!!?You can surely count on these folks for drama, if not coverage of Atlanta’s gay community.”
–John

“The only thing this media outlet was good for was drama, drama, drama. They spent more time pointing fingers at outsiders–and each other–instead of doing their jobs as journalists. Terrible mistakes were made from the start, including hiring Zack Hudson as editor, and the public never took the newspaper seriously. I’m shocked it lasted as long as it did. It was already D.O.A. from the start.”
–John

“Wow, this is more exciting and has more loops and turns than a daytime drama….or a night-time drama for that matter. What’s really important is that a stable and responsible player comes to the table to revive the LGBT media and our community’s voice. … Unfortunately many believe we’re making spectacles of ourselves and the mainstream press is noticing and that’s simply not good for anyone.”
–S.A. 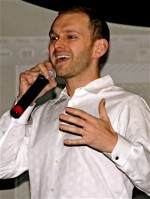 Whether he’s dubbed Hot Gay Joe or the Connoisseur of Culture, Joe Bechely (photo) can dish when it comes to what will be hip and fresh in gay Atlanta this year and did so during a stop before a gay networking group. View more photos.

“All of us in the AEN are grateful for his time with us that night. Joe really gave an informative and insightful talk.”
–Todd Harkleroad

“What a great showing and very fun crowd!!”
–Michael Thacker

“It was a fun mixer!”
–Kevin Malin

Re: SoVo, former LGBT publications with $11M in debt sell for $26,200
The assets of the former owners of Southern Voice, David magazine and three other LGBT publications are scheduled to be sold this month for a fraction of the $11 million debt that pushed the companies to bankruptcy. The bids by the potential suitors include $8,000 for the assets of Southern Voice and David.

“What a shame.”
–Ned Sanderson