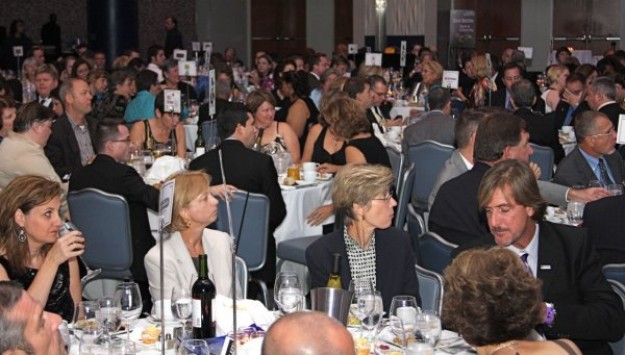 Gay business networking gets supersized when AEN, Out & Equal and Atlanta Gay & Lesbian Chamber of Commerce join forces for Spring Fling. Here’s how newbies and shy types can maximize their networking mojo.

Schmoozing is a chore for some, but armed with some common-sense tips, you can make the most of Thursday’s Spring Fling, gay Atlanta’s largest networking event of the year. The event – a combination of facilitated “speed dating” with other professionals and expert speakers – is set to fill the Westin Plaza with business card swappers and contacts. Buy tickets online now.

The event’s been a big boon for the organizing groups. Check out past sessions from Fall Madness in 2011 (photos), and 2010 (photos), March Madness earlier that year (photos), and the inaugural 2009 event (photos).

This round’s guest speakers include representatives of academia and businesses both large and small. Pete Mounts is president of managed services for the McKesson Corporation; Toby McChesney serves as assistant dean for graduate recruiting at GSU; and Justin Ziegler is a principal partner with Common Ground Real Estate at Keller Williams.

But stop worrying if networking doesn’t come naturally for you. While you stash extra business cards for Spring Fling — and AGLCC’s Fourth Friday Networking the next night — take these tips along with you, too. You’ll be maximizing the potential of your business like the pro you are.

Introverts and inexperienced networkers often apologize when asking for an individual’s help or time because they see networking as an imposition, not as an exercise in relationship building. You’re worth their time, so you don’t have anything to be sorry about.

Now, don’t just say “Duh” and move on. It sounds simple, but sometimes you’re so focused on needing to network that you don’t realize you’re walking around with a scowl on your face. People are more likely to warm up to a grin than they are to someone who looks like bitter Betty.

Joining a group engaged in conversation can be awkward. The best way is to pose a question to the group after getting the gist of the conversation. You actually build your credibility by doing it. If you have trouble coming up with questions in one-on-one situations, practice some icebreakers in advance. Also remember to ask the person about themselves and focus on them. People love to talk about themselves, and it takes your mind off of your own nervousness.

Just as you like to hear your name in bed, so it is in the business world. Repeat the person’s name as often as possible, and they’re instantly more interested in you as a result.

A mistake some shy people make is thinking you have to act like an extrovert in networking situations. While you do have to make an effort, don’t be fake. It can actually be endearing to be the authentic, aw-shucks, humble person you are. It’s OK if you’re a little awkward. Just don’t keep apologizing for it.

Avoid finding the one person with whom you spend all your time for the duration. It may be more comfortable, but it defeats the purpose of networking. Ask your buddy if he or she can make introductions to other people he knows.

Sometimes people have trouble networking because they don’t think they have anything significant, such as a job or a contact, to give back to someone who helped them. What you offer doesn’t have to be a job. Sincere interest in the other person—even flattery—is a form of generosity and goes a long way.

Get over your fear of rejection

In the course of networking, you’ll encounter people who can’t or don’t want to help you. That’s life. Don’t take it personally and don’t dwell on it. It’s all part of the process.

The person sitting next to you may feel as uncomfortable as you and will appreciate you breaking the ice. And they just might be a fabulous contact for you or know the right person for you to talk to. You just won’t know until you try.

Sharing information—whether a website, article, report or phone number—with new contacts builds your credibility. So if you promise to e-mail a report to someone you met, make sure you do that. Doing what you say you’re going to do tells people you keep your word. If you don’t, you’re just another schmoozer.

And if you’re networking to find a job, we’re hiring.