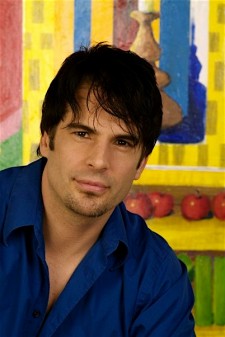 For weeks this past spring, “The Young and the Restless” actor Thom Bierdz (photo) somehow managed to keep quiet about daytime television’s biggest plot twist of the year.

His much-beloved character Phillip Chancellor III, who was killed off in a drunk driving accident 20 years ago on the number one rated soap, was actually alive.

But the out actor was lured back to the role only after “Y&R” producers revealed to him that Phillip chose to fake his own death back during the Reagan administration rather than come out to his wealthy dysfunctional family.

“That was the reason I said yes,” explains Bierdz, who visits Atlanta for the first time to host two events this week. “To have the new head writer Maria A. Bell sincere in her intent to flesh out Phillip to be a full human being, not a stereotypical gay, but a father, son, grandson, and in a marriage he needed to transition to friendship because he still loves his wife but not sexually.”

On Thursday night, the actor-author-artist will lend his time and talents to the holiday party and fundraiser for gay workplace advocates Out & Equal at the Palomar Hotel. Bierdz, who has become a popular painter in Los Angeles, will be creating a brand new work live to be auctioned off at the event.

On Friday night, Bierdz will meet fans and sign copies of his critically acclaimed memoir “Forgiving Troy” at Outwrite Bookstore & Coffeehouse, followed by an after-party at Gilbert’s Cafe. The events are sponsored by Out & Equal.

“The idea of workplace equality means everything to me,” says Bierdz. “Fortunately, I am a very visible example of that. I was hired in May to be the first openly gay actor on daytime in a contract role. This is also on the number one soap that is dealing with homosexuality after 38 years on the air. I am so proud to be gay in real life and on TV in a way that will reach 30 countries, who, come on, could use some positive gay characters!”

For Bierdz, the storyline hits home personally as well. Twenty years ago, the budding soap heartthrob quit the show after an agent advised him to keep his sexuality on the down low.

“Twenty years ago, I was also on this show but in the closet,” he says. “It feels right to be out in the workplace and to be treated equally as I am on the ‘Y&R’ set and by everyone at CBS.”

The Bierdz bombshell this year on “Y&R” thrilled longtime viewers and kept the drama in overdrive on the soap. 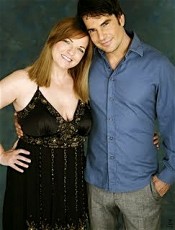 Not to mention a wife Nina (Trisha Cast with Bierdz, bottom photo) who was left holding your infant son.

So what was it like to re-connect on-set with the 81-year-old feisty Emmy winner Cooper, who Bierdz first acted opposite as a teenager?

“I adore her to the bone,” Bierdz says. “I have known her, felt her great, tender soul for many many years. She is a giver and a consummate performer. I can see in her eyes a woman who has seen much and understands me at every level.”

Soaps often act as societal barometers and with the recent flurry of gay and lesbian storylines on “One Life to Live” and “As the World Turns,” Bierdz is thrilled that Phillip is home.

Of the progress, Bierdz says: “It says everything! It is wonderful. Twenty years ago my character faked his death because at that time it was so hard for a gay man in a prominent Midwest family, newly married with a kid, to come out. It made sense in many ways that my character waited until now to revive himself. The new generation is so liberal. And why the heck not? Gay people are nothing to be afraid of. And we aren’t jokes. We are real, lovable people.”

Off-screen, Bierdz emails fans that write him to divulge that, like Phillip, they are also struggling with being gay and married.

“I have helped some come out,” he says. “Many women write to thank me for telling the story of their son or their brother or their husband who they love.”

And while many soap fans tune in for a daily drama fix, Bierdz somehow survived a harrowing real-life tragedy off-screen no suds scribe would dare concoct.

Bierdz’s brother Troy, who was later diagnosed as schizophrenic, will spend the rest of his life in a Wisconsin state prison. The actor visits and talks to his brother regularly.

When asked how he managed to put the unthinkable down on paper, Bierdz concedes: “Sometimes, when I think I am immune to it by now, I’m surprised that I’m still quite raw with emotion about it. I have no idea if I will be able to hold tears back when I read at Outwrite.”

Before allowing the actor to return to his painting and fundraising work, we managed to squeeze one last scoop out of him for his local fans.

Phillip, who was recently exited Genoa City to take a mysterious trip down under in Australia, will be back, in no small part because of overwhelming fan response.

Dishes Thom: “I have been told, ‘You can tell Out & Equal that the character is not written off the show and will be a presence and important part of the fabric of the show for time to come.’”

Richard L. Eldredge is a veteran reporter and columnist covering Atlanta since 1990. He is the longtime former writer of the Atlanta Journal Constitution’s ‘Peach Buzz’ column, among many others.