‘X Factor’: The good, the bad and the tone deaf

“The X Factor” kicked off with two nights of auditions and didn’t bother to hide its “American Idol” roots. There was a big, exaggerated opening, silly dramatic music, huge crowds, sob stories and of course, a whole heapin’ mess of “singers” who proved that delusion comes in all ages, shapes and sizes.

Before we get to the singers, let me say a few words about judge Cheryl Cole. She was famously given the public boot from the show after taping the Los Angeles auditions. The reason: No one could understand her thick accent. Bullshit. I don’t know what wrangling went on behind the scenes, but having watched Cheryl on the UK version of the show, she’s funny, compassionate and has just as much talent as her replacement Nicole Scherzinger, who tries hard to be a diva seemingly unaware that those days are over.

With a $5 million prize and recording contract on the line, there’s more at stake on “The X Factor,” because even if the winner’s album flops, they’ve still made bank. With live audiences watching the audition process, there’s also more pressure to do well.

First up was 13-year-old Rachel Crow, who got plenty of pre-show publicity for her sassy banter about being poor, living with relatives and needing her own bathroom. She sang Duffy’s “Mercy,” and it was definitely good, but I’m not sure she’ll make it out of the boot camp round. She peaked a little too early and nerves are sure to set in, so enjoy her pluck while you can.

Then there was Siamese (top photo), who said he liked girls, but looked like the test tube baby of Prince and a Pointer Sister. I forgot to make a note about his song choice, but there was a whole lot of Riverdancing and enough splits to make your balls ache. Inexplicably, they let him through and Simon called him “fascinating.”

Stacey Francis, who also got a big pre-publicity push by being featured in preview clips, said she was given the Ike Turner treatment by her man, who told her she was a nobody and a nothing. She proved him wrong by singing the shit out of “Natural Woman.” 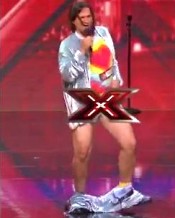 Paula Abdul kept her crazy in check until greasy, paunchy Geo Godley stepped on stage, starting singing and dropped his pants to wave his dick around (second photo). As horrified audience members rushed their kids from the auditorium, Paula retched into her hand and fled the judges’ table for the bathroom. When she returned, she told Simon that Geo Godley nearly made her sick. That is some serious stunt queen action right there, Miss Pills, and I salute you!

Boy band The Answer (third photo) did a mash-up of Adele’s “Rolling in the Deep” and Britney’s “Until the World Ends.” The boys were handsome, could actually sing and the girls all seemed to love them, so they got through easily enough.

The first night closed with the melodrama of garbage man Chris Rene (fourth photo), an Eminem wannabe just 70 days sober and fresh out of rehab. He sang an original called “Young Homie,” which brought LA Reid to his feet with a fist pump while Paula blubbered and seal clapped. As the judges praised him, Chris cried in slow motion while Coldplay’s “Fix You” played in the background. Simon warned him to stay clean or he’d be out. That’s a lot of pressure on an addict.

For night two, the auditions moved to Miami, which proved to be a disaster. So many people told by their mom’s they could sing, so little time. LA Reid wanted to slit his wrists after Ashley Sansone murdered “A Piece of My Heart.” Her family apparently told her she could sing like Pink, and Ashley went a little batshit when the judges told her she was terrible. Ditto the Nicki Minaj wannabe with the blonde wig and fake British accent, who asked the audience for support and got booed off the stage.

Nick Voss (fifth photo) was the first from Miami to make it through to boot camp, with a big backstory about getting fired so he could come to auditions. Nick sang a middling cover of Elvis Presley’s “Trouble” while doing the herky-jerky all over the stage. Someone needs to tell him that shaving stripes into your hair not only went out 25 years ago, but also only looked good on Cyndi Lauper.

The Miami auditions wrapped up with Ashley, a 14-year-old ghost hunter, who couldn’t sing a note even with all that spirit help. Paula said she understood Ashley, because she sees ghosts, too. Oh, Paula, this is why we love you.

In Dallas, Johnny Rogers and his storm trooper helmet hair failed to impress. Simon called him a “Justin Bieber doll gone wrong” after he sang an original song accompanied by awkward dance moves. Then there was Dylan from the Kentucky boondocks, who said he sold his truck to get to auditions then let his inner Juggalo loose with a screaming, profanity-laced rant before face-planting into the stage.

Dexter Haygood once toured with Hall & Oates, but at 49 was looking for one last chance at stardom. After doing a James Brown impression with “Sex Machine,” Simon ordered him to sing something else a cappella. After a dramatic cut to commercial (there’s tons of dramatic cuts and commercials, by the way), Haygood sang “It’s a Man’s World” and brought the house down. I doubt he’ll make it out of boot camp either.

The last 10 minutes of the night were given to Xander Alexander (bottom photo), who Simon called a “bitchy nasty diva” after his train wreck audition. Xander (and don’t you DARE call him Alexander, because he hates it) was totally queening out comparing himself to Whitney, Mariah, Gaga and Britney until his mouthy ass got on stage and he tried to sing Edwin McCain’s “I’ll Be.”

He argued with Simon, got lippy with Nicole and LA, and pretty soon the audience was booing. The truth is, Xander’s voice wasn’t that bad, but he overplayed the attitude and was sent crying to the parking lot. The only song he’s gonna be singing is “I’m Lovin’ It” while bagging up Happy Meals at McDonald’s.

See you next week.