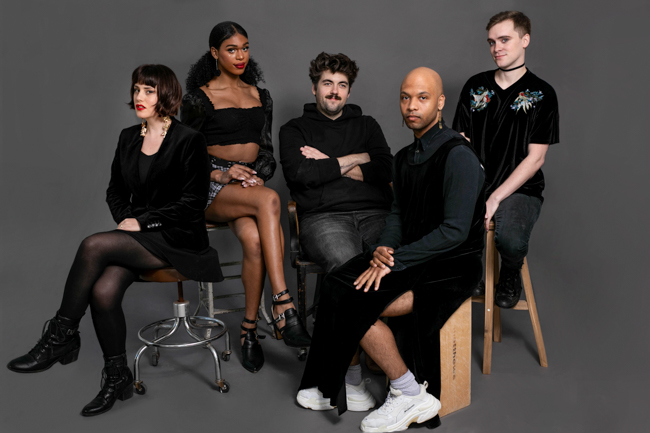 It’s hard to believe it’s been five years since Wussy sprouted onto the Atlanta scene to bring a semi-regular coffee table books and branded events that the city’s queer arts crowd — and the audiences who love them — needed.

“I've got a lot more grays than I did five years ago,” he added.

The journey began in April 2015 with the birth of what was described then as “an online magazine for Southern queers.”

“Our initial goal was really just to start covering the queer art and drag scene in Atlanta through an online blog format,” Dean said.

Dean said he’s proud of what he and his content team accomplished from the beginning, and what those projects ultimately evolved into — a slick, coffee-table-style magazine with loyal readers and international distribution.

“Getting Volume 1 printed and released was a huge milestone for us,” Dean said. “It was more of a literary magazine back then, but it is still a great capsule of queer writers and artists.”

“We kept pushing the envelope of what Wussy could be, and eventually we got trans icon Amanda Lepore to be on the cover of Volume 4 and things have sort of snowballed from there,” he added.

A major part of Wussy’s evolution and recognizability, though has been its oh-so-queerly curated events.

There are the film screenings, which brought “Steel Magnolias,” “My Own Private Idaho,” “Jawbreaker,” “Little Shop of Horrors,” “Hocus Pocus” and so many other cult favorites back to theaters. They also team with Out on Film for Queers on Film each month.

And don’t forget the endless stream of boldfaced names from the drag world, including Jujubee, Monet X Change, the Boulet Brothers, Lady Bunny and Rify Royalty in the past year alone. But the Wussy crew never forgets its roots, continuing to collaborate with a flood of local drag talent, including a pre-Drag Race Violet Chachki, as well as most of the names you can think to add.

Dean counted the first Wussy Prom at the Heretic as “one of the best event memories.” And the list of events and accomplishments goes on and on.

“We never dreamed we would ever be able to pay our editors, writers, graphic designers and other freelancers,” Dean said. “The events have been a huge part of that. They help sustain us, fund our printing costs, keep our presence firmly rooted in Atlanta, and allow us to build community in different ways.”

Dean attributes Wussy’s success to its team of writers and editors, which has changed and evolved over the years.

“Some of the architects who helped build the magazine have moved on to other things, like Zaida Sanchez and Austin Frantz,” he said, adding that the death of Co-Founder and Operations Manager Matt Jones in 2018 hit the Wussy family hard.

“That was a huge blow for us,” Dean said, “but his creative and salty spirit still runs through everything we do.”

Over the years, Wussy’s crew have learned how to accept criticism of content that some find controversial.

“We've always wanted Wussy to be an outlet that offers unfiltered and diverse opinions on arts and culture, so obviously we have ruffled a lot of feathers,” Dean said. “I am really proud that we've stayed true to our values and mission statement since the beginning.”

Things are not slowing down as Wussy enters its next phase. More drag shows, gallery shows, film screenings, panel discussions, artist markets and comedy shows are on the horizon.

Wussy was going to kick off a new Queer Artist Market at the Georgia Beer Garden on March 29, and a film slate in April was already set before coronavirus quarantine protocols went into place. Dean vows to return, including Wussy’s hotly-anticipated eigth magazine installment, hopfully in April.

“We cannot wait to announce who we've lined up for this issue,” Dean said. “It's our biggest issue yet.”