Writer/star puts quirk in Out On Film Saturday

Actress and writer Marja-Lewis Ryan, who will be at Saturday afternoon’s Out on Film screening of her movie “The Four-Faced Liar,” brings one of her characters to quirky, three-dimensional life in the film. 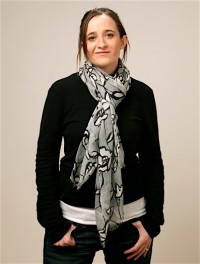 When we first meet Ryan’s character Bridget (top photo from film, left) in the lesbian comedy, she’s on the john, smoking a cig, reading Emily Bronte. Bridget lives her with male friend Trip and one night at a New York bar they frequent they meet couple Greg and Molly. At first Molly is rather taken aback by the free-spirited, womanizing Bridget until she gets to know her better – and falls for her. Obviously Greg does not understand.

The movie is based on a play Ryan (second photo as herself) wrote back in 2006, produced a year later with all the same actors, who are also all friends and NYU Tisch grads. It took her about nine months to adapt the play into a film. Jacob Chase directs.

The difference between the film and play is that the movie is much more comedic and much lighter, Ryan says. Bridget is very comfortable about who she is, and it’s Molly who has questions as she embarks on a relationship with her new friend.

“The big question is not whether Molly is gay or straight,” Ryan says. “She never has that discussion. We wanted to be truthful to that. Labels are not that important.”

She says that the characters and storylines are not entirely autobiographical.

“Plotwise, it is not, but I did take a lot of my emotional arc and put it into the play,” she says, laughing that she certainly is not as brazen as Bridget, who’s not above a one-night roll in the hay.

Ryan has had a busy year. The film premiered at Slamdance—which takes place simultaneously with Sundance—and she has been traveling from festival to festival with it. She’s visited cities she has never been to, including Atlanta.

Ryan and her “Four-Faced Liar” crew—Emily Peck, Daniel Carlisle and Todd Kubrak—are working on a short film, also LGBT themed, that they hope to debut next year.

One of the films that “Four-Faced Liar” resembles is “Kissing Jessica Stein,” a movie Ryan says she has seen and admired, although the characters in that movie are older than the twentysomethings here.

Filmgoers looking for more of a happier ending that what “Jessica Stein” provided will be very pleased.