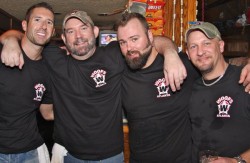 Just call them the little gay sports bar that could. Woofs took a bow on Thursday with a packed house to celebrate its eighth anniversary as LGBT Atlanta’s only sports bar.

Fans of the bar have long credited owners Gary Sisney, Bill Hamilton and Gregory Hughes with creating a low-key atmosphere in the most unassuming of places — tucked inside a small strip retail center on Piedmont Road just north of Midtown and just inside the southern tip of Buckhead.

Woofs opened in the 1,900-square-foot space in 2002 with a sports-all-the-time approach they’ve stayed true to ever since. They fended off redevelopment in the area in 2007, signing a five-year extension on their lease, and are now – like most gay bars and other businesses – fighting to stay afloat among turbulent economic times.

You’d never know that from the crowd on hand Thursday. The line to enter the invitation-only party snaked out the door. The flat screen TVs offered a hearty helping of sports as fans noshed on barbecue and enjoyed other helpings.

Do sports fans nosh? Gay ones certainly do.