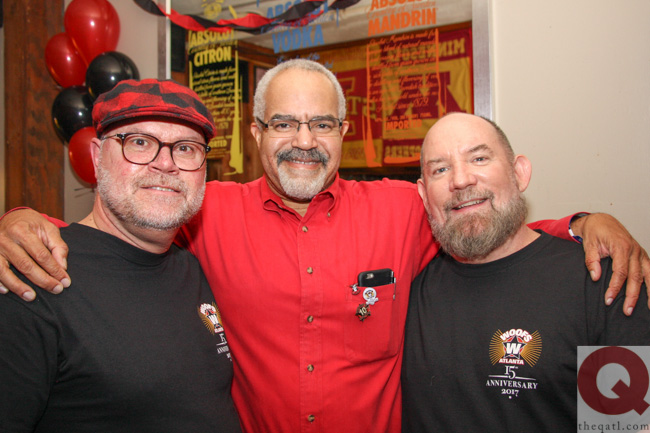 Woofs is packing up its flat-screen TVs, team banners and rainbow paraphernalia and moving from its longtime home after 17 years on Piedmont Road.

But the LGBTQ sports bar isn’t going far. It’s moving one mile south to 494 Plasters Avenue, which is off Monroe Drive and not far from the retail and restaurant district Armour Yards.

Woofs owner Gregory Hughes said they’re aiming for a July 1 opening in the new space. The Piedmont Road location will close a few weeks before to allow time to make the move.

Hughes (top photo center) said the move has been about a year-and-a-half in the works.

“The current building has been sold and it is very up in the air what’s going to happen next, and I decided that I wasn’t going to wait to find out,” Hughes told Project Q Atlanta.

Woofs fans shouldn’t worry about the bar pivoting away from what it’s known for, Hughes said.

“All we’re doing is moving the bar into a brand new space. It will still be a sports bar, we’re just moving the location and my staff is coming with me. There is nothing changing on how we are as a business,” he said.

But there are some upgrades in the new space. It's about 800 square feet bigger and comes with more parking than the Piedmont Road location — about 45 spaces total.

Hughes is most excited about the new kitchen, which will allow him to expand the menu for customers.

Hughes didn’t get nostalgic when asked how he feels about leaving the original Woofs location after 17 years.

“Happiness. I’ve been wanting to get out of that location since 2007. It’s time,” he said. “Either we will succeed or we will fail, but it’s time.”