Wonder Woman 2: History. Who Needs It? 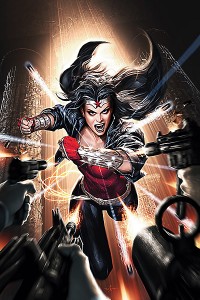 Welcome back, gay geeks! Sorry for the delay between installments, but we had to put on glitter and short shorts for Halloween, and well, that takes some doing. Now let’s continue our discussion of that gayest of all gay comic book icons: Wonder Woman.

Last time, we channeled our inner Tim Gunn and had a lively little debate going about Wonder Woman’s new look. A new wardrobe is one thing, but what about the story?

Now that we’re four issues into the storyline of the All-New Wonder Woman (#604 dropped last week), we’ll attempt to answer if it’s worth reading or not. Read on, and let us know what you think in the comments section below.

First, a little background. Wonder Woman has had her fair share of writers over the years. Some were really great—Greg Rucka, Phil Jimenez and George Perez—and some were not. “Sex and the City” writer Alan Heinberg’s run was a disappointment, and let’s not get started on the mess bestselling author Jodi Picoult made of our girl.

Most recently, fan favorite writer Gail Simone has been taking Wonder Woman in a great direction that we’ve both really enjoyed. Unfortunately, sales weren’t there. Enter “Babylon 5” writer J. Michael Strazcynski, who has altered Wonder Woman’s history so that her home of Themyscira—or are they calling it Paradise Island again these days? We’re still not sure—was invaded when she was still a baby. Most of the Amazons, including her mother, were slaughtered, and she grew up in the modern world wearing clothes that one of us finds to be horrendously un-Wonder Woman.

Sure, a reboot could gain new readers, but at what cost?

Rob: You don’t hate anything. Except 75 percent of the things I do. Now, why don’t you hate it?

Jay: OK, so we mentioned Gail Simone. While I appreciate Gail’s efforts to write some epic stories, she ultimately ended up expanding Wonder Woman’s supporting cast so much that WW ended up being a guest star in her own book. While I didn’t hate Gail’s stuff—far from it—I like this new take a bit more by comparison.

Rob: I think Gail Simone nailed the tone of what a Wonder Woman story should feel like: an epic, mythology-infused story about an incredibly powerful woman who’s not just powerful because of supernatural gifts. Plus, she had all these great story threads building up, and now we’ll never see them play out.

For example, we were totally convinced that Achilles, leader of the male version of the Amazons—Manazons, I’ll have you!—was super gay, but we’ll never know, because we now have a biker chick fighting a scarred, naked guy who apparently has no genitals. DC pulling Simone off the title before we see Achilles get down in some Manazon on Manazon action is criminal.

Jay: While I would have loved to see some of Gail’s stories through to the end, I’m enjoying this new direction. It’s a streamlined Wonder Woman. She hasn’t quite come into her own yet, and I think she’s a more accessible character.

Rob: See, that’s my problem. Wonder Woman is the female super hero. She should have already come into her own and be showing everyone else how it’s done. That’s what I love about her. Wonder Woman walks into a room, and everyone is all, “Oh, shit.” This take is moving away from the things that make her Wonder Woman.

I like that it makes her more youthful and strips away some of the baggage that has led some fans to ID her as the grandmother of the DCU, but, without the stories we’ve been reading as part of her history, it’s like reading about someone else they’ve just decided to call Wonder Woman.

Jay: Fair point, but she did have some baggage. There were, oh, 30 or so supporting characters before, and now it’s just her. And she’s kicking some ass.

I think the interesting spin on this story is that she’s having flashbacks to what her life used to be like—ya know, when she wore the star-spangled panties. So we’ll most likely get back the “classic” Wonder Woman at some point, but hopefully better.

Rob: Yeah, I would like to see them reincorporate the history while keeping this younger, no-holds-barred take. She’s an Amazon, for crying out loud. Violence should always be her last resort, because she’s Wonder Woman and all about peace and stuff, but she should also always kind of hope for it to get to that point. In this take, you can tell she likes kicking some ass. She has a chip on her shoulder big enough to hide those stupid shoulder pads.

Rob: Oh, I’m sure she’s gotten laid. Like Samantha once said on “Sex and the City,” “You don’t go to Wonder Woman’s island without going native.” But we’ve never seen it happen, man or woman, since 1986 when Steve Trevor was removed as her love interest. Since then, she’s been on the world’s longest dry spell.

Jay: And that’s a damn shame. Anyway, I like the new take, and I’m recommending it to our fellow gay geeks out there. Rating: 4 out of 5 pairs of (what used to be) star-spangled panties.

Rob: Well, I’ll grudgingly admit that I do enjoy reading the issues, but let’s not forget that this is actually the all-new “All-New” Wonder Woman. In the ‘60s, she was de-powered, which pissed off Gloria Steinem—no one wants to piss off Gloria Steinem—and look how that turned out. I don’t hate it, but I hope it’s over soon.

Jay: That’s how I feel about bottoming sometimes.

Rob: … Anyway. It gets 3 out of 5 pairs of star-spangled panties from me.

Jay Dempsey and Rob Beck are Atlanta’s answer to some of pop culture’s sassiest duos, including Betty and Veronica, Mary-Kate and Ashley, and Donna Troy and Wonder Woman. And yeah, they really meant it when they said glitter and short shorts for Halloween.