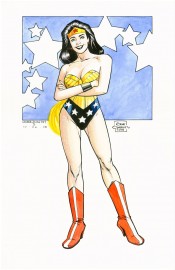 OK, gays. It’s time to address the elephant in the room: Wonder Woman doesn’t wear star-spangled panties anymore. Even if you’ve never picked up a comic book, you know who she is and what she usually looks like.

Take a look around any of our wonderful local gay bookstores, and you’ll see the iconic likeness of Wonder Woman’s gold-plated bustier, red bodice and blue panties (top photo) on notebooks and coffee mugs. Maybe you best remember Wonder Woman from ‘70s TV as embodied by Lynda Carter.

Or, maybe, like Jay, you pretended to be her on the school playground when other boys were pretending to be Superman or Batman. Maybe you actually read her comic book every month. And if you aren’t, why not? Honestly, it should be a requirement for keeping your gay geek card.

Our girl recently underwent a change for her 69th birthday. Under the guidance of new writer J. Michael Straczynski and comics legend Jim Lee, DC Comics gave WW a bit of a makeover (bottom photos), ditching the look that she’s recognized for and styling her with some more “modern” fashions, including pants (gasp!) and shoulder pads (double gasp!). Let’s just say a lot of people lost their shit, including Rob, who hasn’t been able to stop looking indignant over the whole debacle for two months.

The new look garnered a lot of attention in mainstream media, most of it negative. Turns out that people don’t particularly like it when you mess with an American icon. But is it really all that bad?

We think it’s going to take more than one edition of Wonder Geeks to answer this question, so we’re dedicating this first part entirely to the costume—because we’re that gay, and it’s our hobby to care that much about it—and the next to discussing the revamps to her history and storylines. Check out our following banter, and let us know what you think in the comments section. 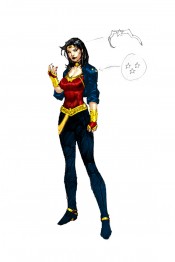 Jay: Yeah, but what about just the look on its own? Leather pants?

Rob: I hate them, especially with the weird stirrup thing she’s got going on around the heel. It looks like she just walked out of the disco rodeo.

Jay: Yeah, the pants meant ditching the red boots. Every drag queen in America owns a pair of those boots. I don’t really hate the pants though. I mean, it’s just not really practical to battle evil while wearing nothing but skimpy undies. I speak from experience.

Rob: She was magically formed from clay and given life by a bunch of Greek goddesses. We left practicality behind a long time ago. Which brings me to my next point. How could they add straps to the top? I always imagined that one of her superpowers was being able to keep that strapless top up while battling the forces of evil. Straps just seem lazy.

Jay: That’s certainly one of my superpowers. Anyway, the elements that were oh-so “Wonder Woman” have really been toned down. I think there are a couple of W’s somewhere on this get-up, but her trademark logo now looks more like the “Carrie” necklace Ms. Bradshaw wore on “Sex and the City.”

Rob: Exactly. They’re more accessories than weapons, which I always liked that her accessories doubled as weapons. I have yet to see her throw her tiara as a boomerang like she used to, and those bracelets just look useless. I hate the W’s on them, and they don’t even go all the way around her wrists. Remember how cool it was when she used the bracelets to smash a mind-controlled Superman’s ears?

She couldn’t do that now.

Jay: Still, the new tiara looks cool. I would wear it.

Rob: “Would?” Sweetie, you’re wearing it as we type this. Actually, aside from the fact that it’s apparently been de-weaponized, the tiara is the one thing I like. Although I love the classic one, this looks more stylish.

Unlike those shoulder pads. Ugh. The only thing that would make them OK is if spikes shot out of the stars on them or something. Shoulder pads of death! Now there’s something I could get behind.

Jay: Yeah, I couldn’t figure out if she beat up Adam Lambert and stole his jacket, or if I was reading the new comic book version of the classic ‘80s show “Dynasty.” All in all, I don’t hate it, but it seems to borrow a bit too much from the X-Men’s Rogue.

So would WW’s new look get voted off “Project Runway?” Or, let’s be honest, “RuPaul’s Drag Race?”

Rob: Sure, the look’s updated and parts of it are more stylish, but it’s not Wonder Woman. Didn’t they learn last time with the ’90s-era bondage biker chick costume?

I would make her lip sync for her life. I give it zero pairs of star-spangled panties, because, well, she’s not wearing any.

Jay: I like it! I’m making it my Halloween costume. I give it three (out of five) star-spangled, shoulder-padded jackets.

OK, we’re a house divided on the look, but is the “All-New” Wonder Woman’s story worth reading? Tune in next time for Rob having an aneurism in blog form, or, as we like to call it, Wonder Woman 2 – History: Who Needs It?