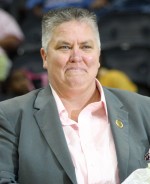 If you’re in Decatur tonight, be on the lookout for 300 lesbians carrying bats.

The Decatur Women’s Sports League returns to Kelly C. Cofer Park in Tucker tonight for the start of their third season. State Rep. Karla Drenner, the only openly gay member of the Georgia Legislature, is scheduled to throw out the first pitch at 6:50 p.m. with nine games on two fields to follow The season continues on Friday nights into late May.

Some 300 players across 18 teams will open the new season, quite a jump from the 10 teams and 200 players that started the softball league in 2007.

“The league is a great place to network,” says founder Anne Barr (photo). “With all our diversity, many varied backgrounds and talents, we try to keep up with the needs of the times and health care and job opportunities are a need. We help one another because you never get too old to be a team player on the field and in life.”

Since its inception, the Decatur Women’s Sports League has expanded to offer basketball, bowling, volleyball, tennis and badminton. The league’s badminton season opens March 30 and runs into mid May.