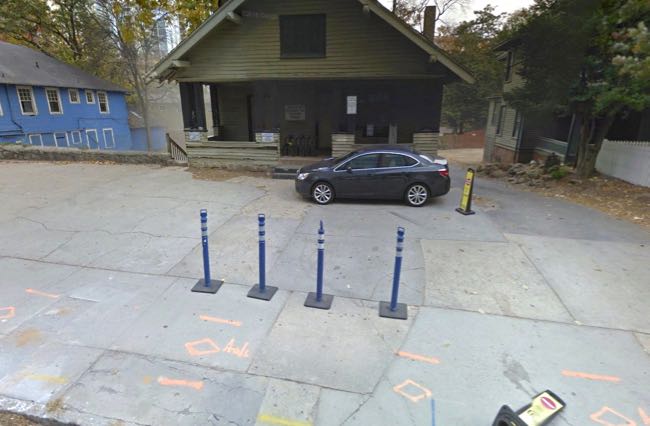 A woman was killed and several other people injured outside two gay-popular Midtown restaurants early Saturday when a valet apparently accelerated rather than stopped a vehicle he was attempting to park.

Ebony McCrae-Curley, 33, was killed when she was pinned between two vehicles during the incident about 12:30 a.m., according to the Atlanta Police Department. Five other people suffered minor injuries in the incident.

The incident took place on Juniper Street between Einstein's and Joe's in a valet parking area that serves both popular restaurants (photo). The nearly block-long stretch and both restaurants are owned by Metrotainment Cafes.

Here's what happened, according to Atlanta police:

A valet driver at 1057 Juniper was attempting to put a car into park and to attend to the next vehicle. The valet driver failed to put the vehicle completely in park as he exited. The vehicle began to roll forward and the driver jumped back in the vehicle to stop it and his foot slipped from the brake and hit the gas pedal. The car accelerates approximately 10-15 feet and struck a group of pedestrians standing next to another parked car. The victim was pinned in between both vehicles. Grady EMS responded and transported her to Grady Hospital. The victim was pronounced dead at Grady at 0057 hours.

On Saturday afternoon, an Atlanta police spokesperson declined to say if anyone has been charged or arrested in the incident.

One of the victims described the incident as “horrific.” Via 11Alive:

Witnesses told police and 11Alive that they were in the parking lot waiting for their vehicles when the incident happened.

“It was horrific,” said Shawn Williams, one of the victims. “The car basically mauled us. I mean, it was by accident but he mauled us.

“We come out from having a great time and it was a mistake but someone lost their life.”

We reached to Jeff Landau, Metrotainment's CEO, and will update the post if he responds.

Last year, Metrotainment announced plans to remake the derelict space between the restaurants into a pocket park to serve its customers.

UPDATE | Landau said in a statment provided to Project Q Atlanta that he is “deeply saddened” by the accident.

The entire Metrotainment Cafes family is shocked and deeply saddened by the tragic accident that occurred last night. Our thoughts and prayers are with the victims and their families.