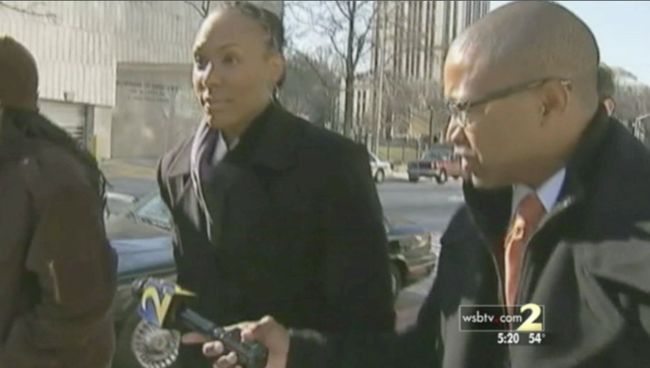 Who says celebrity doesn't count for something? Retired basketball star Chamique Holdsclaw ended her high-profile spat of domestic violence with her ex on Friday by pleading guilty to attacking her car. She got smacked with? Probation.

The Fulton County District Attorney announced late Friday that Holdsclaw pleaded guilty to six charges stemming from attacking her ex-girlfriend, Jennifer Lacy, last November. The incident started outside a church on Ponce. With the plea, Holdsclaw received three years probation and was ordered to pay a $3,000 fine.

Other conditions of the plea:

Holdsclaw must avoid violent contact with the victim, complete anger management treatment, and perform 120 hours of community service speaking with youth about depression, overcoming adversity and the consequences of one’s actions. She must also relinquish all firearms.

Holdsclaw gets probation for what was a pretty nasty attack. Lacy told police that Holdsclaw approached her at the church as she worked out. Holdsclaw asked for the keys to her Range Rover to place some items inside, Lacy said yes and that’s where things went south.

Lacy drove to a friend’s house, only to have Holdsclaw approach the vehicle swinging a bat. After she allegedly smashed two windows of the Range Rover, Holdsclaw brandished a handgun and fired inside the vehicle. Police told WSB that Holdsclaw possibly fired the shot in an attempt to ignite the gas and spark a fire.

Holdsclaw won three college championships, a gold medal in the Olympics and played 12 years in the WNBA, including one with the Atlanta Dream. She was arrested in November after the attack, indicted in February and pleaded not guilty in March. Lacy, who played for the Dream last season, is now on the Tulsa Shock roster.