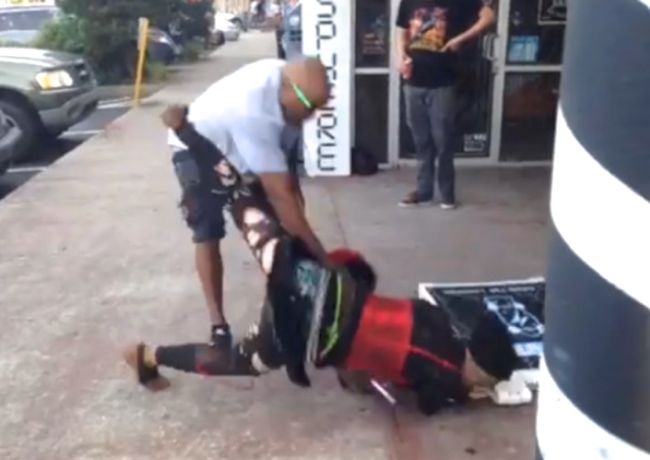 The man who shot the viral video that some LGBT activists say depicts the stomping of a transgender woman in Little Five Points counters that the altercation wasn't rooted in transphobia and that his clips don't accurately portray what happened.

Vine user TriAngle SquarE spoke to the GA Voice and Creative Loafing as his handful of clips (NSFW compilation below) went viral this week. He asked to remain anonymous in the interviews and has since deleted his account.

“I saw this homeless lady yelling and cursing all these people,” he said. “She was yelling ‘fuck you’ and doing all this crazy stuff. It seemed like a usual day in Little 5 Points,” he said. “She seemed aggressive and was throwing herself on the ground.”

“There was nothing mentioned about gender. She was just yelling at us,” he said. “The videos don’t show the context of what happened.”

“I saw this homeless person yelling, being crazy,” he says. “That’s something I’m used to seeing in Little Five Points. I started filming it on my phone.”

It appears that no calls were made to 911 and a police report was not filed about the incident, which unfolded in front of Stratosphere Skateboards on Moreland Avenue. The clips were posted to Vine on Tuesday. Atlanta police have since canvassed the area for the victim and witnesses, but aren't likely to find much in the way of credible information, a nearby store owner tells the GA Voice.

“This is the most gossipy place you’ve seen and it seems astounding that not one of us have heard anything about it,” says Susanne Gibboney, general manager at Junkman’s Daughter.

“The [suspect] overreacted,” Square says. “I saw members pull that person away and then they helped the person who got hit to her feet and she walked way,” he said. “No one called the police because she seemed fine and was still yelling.”