Will gays breathe easier with Sadie Fields out? 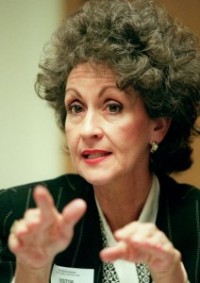 Ding dong, the witch is dead. Not quite, but Sadie Fields is stepping away from her perch atop the Georgia Christian Alliance and her leading role fighting anything that whiffs of benefiting the state’s LGBT residents.

Combined with the recent death of former state Sen. Nancy Schaefer, it seems that two of the most vicious — and effective — voices against gay issues and other progressive causes in the state are sidelined.

Will it make a difference? Progressive leaders may hope so, but with Atlanta seemingly isolated as an island of political blue in a sea of political red, it’s doubtful.

Fields (photo) is the mother of an estranged lesbian daughter who nearly single-handedly pushed a gay marriage ban through the General Assembly in 2004. Not bad for someone who doesn’t hold elective office.

But there she was, clad in sneakers, working the halls of the state legislature to push a ban on same-sex marriage, which by the way, was already banned in the state. She doesn’t like condoms, either.

Fields recently announced on GCA’s website the she’s taking a leave of absence from the organization.

A time for change comes to us all. It is now my time for a change and I wanted to let you know that I am taking a leave of absence from my current position as State Chairman of the Georgia Christian Alliance. While I will no longer serve in that capacity, I will continue to work toward furthering our conservative agenda in other ways.

Please accept my heartfelt thanks once again for your support and encouragement over the years. You are my extended family – and I sincerely appreciate each one of you.

But Fields promises — or threatens depending on your point of view — to remain active in politics. She said the same to the Atlanta Journal-Constitution without elaborating on what that role might look like.

In a conversation late Saturday, Fields said she would put her organization in abeyance – but would remain active in politics.

Fields reached the peak of her influence in 2004, when she pushed through the Legislature – a two-thirds vote was required in each chamber – placing a proposed constitutional amendment on the November ballot, prohibiting same-sex marriage.

What does this mean? It means that Republican candidates for office can stop sweating over the grades she would have given them on her pre-primary scorecards.

Schaefer was killed in late March by her husband in an apparent murder-suicide. The two-term state senator used her post to criticize gay families and pester gay students. Before her trip through the state legislature, she worked against progressive causes through her Family Concerns in the late 1980s.