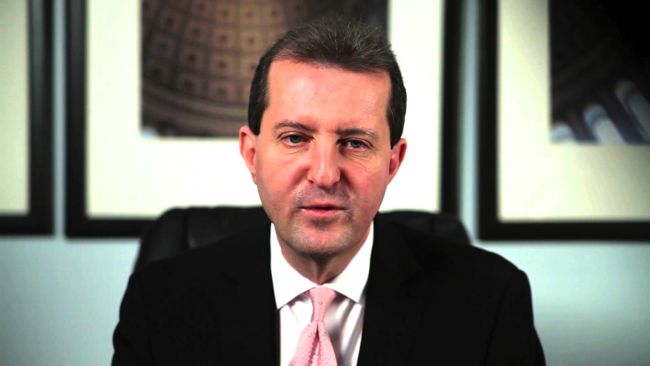 Mike Berlon embraced gay marriage in Georgia before it was cool. Now, the state Democratic Party chair has been pushed out of his job over some lawyerly foibles. Will that bring a change to the Dems' marriage equality stance, too?

Anything's possible as the party gears up for a Senate race next year and a presidential race in 2016. State Democrats want to make inroads on the political stranglehold Republicans enjoy, yet they'll likely face an anti-gay right wing candidate in the race to replace Sen. Saxby Chambliss. The likely Democratic nominee, Michelle Nunn, hasn't offered up her thoughts on LGBT issues. Gay marriage could be thrown under the bus.

In May 2012, Berlon (photo) and the state party offered a full-throated endorsement of gay marriage in the wake of President Obama embracing it:

“Marriage equality is an important human rights issue. Love is not partisan. Everyone should have the opportunity to engage in a relationship that works for him or her regardless of sexual orientation. It’s no secret that the President has gone through some serious soul-searching on this. I am sure he has received input from many sources who deserve this support, including people in long-term relationships who have never had the security or certainty that comes with knowing the person you love will be protected if something happens to them.  I am also sure that he has heard from many of our brave young men and women who serve in our armed forces, and for whom he fought so hard to end Don’t Ask Don’t Tell, as well as others from around the country.

“For many people, this is a difficult issue and opinions are strong on both sides.

“As an individual who has a family member that is in such a relationship, I’ve seen first-hand the obstacles and hurdles that have to be endured just to make the relationship work. It makes me very proud to see that the President recognizes the roadblocks to these relationships and is willing to advocate for equal rights for everyone. It’s courageous and it’s right.

“The Democratic Party of Georgia strongly stands with the LGBT community, the President and his administration, and with all Georgians who believe that we should treat others the way we’d want to be treated. That is not a democratic principle. It’s about human dignity.

“It’s simply wrong to prevent couples who are in loving, committed relationships, from marrying.”

That put Berlon ahead of Mayor Kasim Reed, who didn't come out in support of gay marriage until seven months later. Now, Reed is the force that helped push Berlon from his party leadership post in the wake of his mounting legal woes. As Reed asserts himself as the leader of Georgia Democrats, what will that mean for LGBT issues?

After all, he's got a bromance with Gov. Nathan Deal, who ran a bizarrely anti-gay campaign in 2010, and he really, really wants to win. (And position himself well for a 2018 race for governor.)

“You pick the contests that you have. You lose the second fight by not focusing on the first,” Reed said. “My opinion is Governor Deal has done a good job as governor. The most important effort in the state of Georgia is the 2014 Senate race and, in my mind, the 2016 presidential race.”

He added: “I’m pragmatic and I believe in winning. When you have limited resources you have to put your energy and efforts in winning.”

Reed, even with his late embrace of gay marriage, has a long and healthy track record advocating for LGBT issues as mayor and state legislator. He took a victory lap after backing marriage equality. It'd be tough to back away from that.

But will Berlon's replacement at the helm of the state party be as outspoken on gay marriage? Will they continue to take shots at Deal for his homophobia, like it did in April? Some Democrats are already grumbling that the party's next leader can't be too progressive.

Nikema Williams, the organization’s first-vice chairwoman, is next in line for the leadership post, but her background as a director of public policy at Planned Parenthood’s regional office unsettles some Democrats.

It's been slow and steady, but public opinion in Georgia on gay marriage is improving. A Better Georgia survey found that 61 percent of voters in the state support legalized marriage or civil unions. And state Dems have been nurturing an increasingly active LGBT Caucus.

Who gets tapped to lead the party, which Reed will play a pivotal role in selecting, will offer some clues on how it will advocate for gay marriage and other LGBT issues in upcoming election cycles. And at some point, Nunn will have to open up about her positions, too. Her dad, former Sen. Sam Nunn, helped ban openly gay people from serving in the military before he supported their inclusion. Berlon pushed state Dems to let go of the mute button on LGBT issues they so firmly held. Let's hope they don't go back to it. Gay marriage has scared Democrats in Georgia before.

“It has been a great honor for me to serve Democrats in Georgia for so many years. I have made lifelong friends, and I will cherish the memories I have. Georgia has many rising stars within our Democratic ranks and I look forward to seeing our state get back on a strong financial footing with strong public schools, jobs that pay well, and an economy that supports our small business community,” Berlon said.