As we gird our loins for Thursday’s Season 9 “Project Runway” premiere, we warn you that the first cut is the deepest. Twenty – yes 20! – designers cram the runway, including a new Atlanta queen cutting and sewing for this year’s Team Gay.

For the past three seasons, we’ve griped some in our weekly recaps that the show’s formulaic fashion format drags its four-inch heels in the early episodes each year. It must work for advertisers, but fans shouldn’t get too attached to anyone on Thursday: The premiere auf’s four competitors before they ever hit the workroom, then auf’s one more in the first challenge.

Before the premiere kicks off with a “Road to the Runway” casting special at 8 p.m. followed by an extended first episode at 9 p.m., Lifetime released the jam-packed roster of contenders, including the usual token hipsters, crazy-haired kooks, the series’ oldest designer yet (57, yes, he’s one of our boys too), and for a new twist in the hard-to-understand-accent category scandal-plagued beauty queen Anya Ayoung-Chee, the former Miss Universe contestant who was caught on sex tape in girl-on-girl action.

You know they’ll keep Anya around at least a little while just to milk the drama.

With the mental mayhem of so many initial contestants wearing on our nerves already, the AJC gives us a spoiler we can live with: Atlanta’s Rafael Cox at least gets to show some sass past the initial cut:

It’s fair to say Cox makes it through and is part of the cast of 16. How does he do during the first challenge? Well, let’s just say [Michael] Kors references the Flintstones during his critique of Cox’s first outfit. You’ll know Thursday whether that’s a good thing – or not. 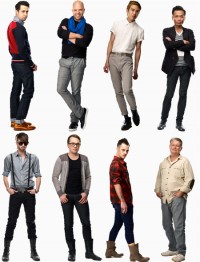 Pop culture blog queens Tom & Lorenzo go out on a limb and call the Decatur-born and raised designer “another black Atlanta queen,” and Rafael himself all but confirms his own Q-Factor in video previews. Our gaydar says don’t argue (top photo). After Mychael Knight, who according to himself is not into guys, fared well in Season 3, locals were left with the unqualified Mitchell Hall, who was there and gone in Season 5. Then the fun but untalented Anthony Williams defied the odds and stuck around in Season 7.

So who else on is on Team Gay? Well, our lesbian gaydar is zilch, so here’s a glance at Rafael’s competition on the male side (bottom photo). Our guy gaydar is not absolutely foolproof, but it’s pinging like a five-alarm flame. Click the photo for a larger view and see if you agree.

With many of them leaving us Thursday, we’ll keep you posted on Team Gay after we get down to a manageable number and down to business in Friday’s first recap of the season.