Wig Out vital to MondoHomo, but still way fun 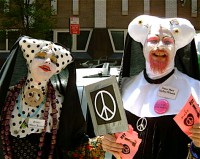 Don’t put away the wig, homey. You’re going to need that crowning glory on Saturday at the Eagle for the fun fundraiser that will help Atlanta’s annual MondoHomo festival happen on Memorial Weekend.

The alternaqueers who work so hard to create MondoHomo Dirty South—Atlanta’s most diverse gay festival of entertainment, social justice and hipster fun—need your help to make it even better.

“Fundraisers are absolutely crucial to putting on the festival,” says Kiki Carr, a MondoHomo founder and organizer. “We raise money in three ways: sponsors, fundraisers and tickets. Fundraisers are at least half that.”

Carr says the multi-location, multi-faceted festival that has made such a huge impression in just a few short years takes place on a short budget, so every dollar counts. But these aren’t the type of people who would ask you to break off some change without offering up a worthy exchange. 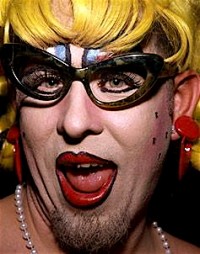 Everything’s more fun with a wig on, so dust off what you wore to Big Wig II last weekend, craft a headdress worthy of second glances, throw on that Halloween monstrosity from 2002—or you know, just visit your climate-controlled wig vault—and let the fun begin. The event costs $7 with a wig on your head,? $15 without. Proceeds go to putting on the Mondo Homo festival.

“This is a way for people to come out, have fun, get something out of it, and help at the same time,” Carr says. “All our fundraisers are aimed at building excitement and raising awareness in different parts of the community so that we’re reaching the most people and attracting different crowds.”

Wig Out, along with last week’s QueerStory Spaghetti Bingo and the May 2 Mondo May Day show and party make sure that gay men, lesbians, people of various generations and inclinations, and people of color are all aware of the fun to be had.

“We’re really happy that this particular event is being supportive of the Eagle, and they’re being so great and really supportive of us,” Carr says. “And reaching the Eagle’s crowd is going toward making MondoHomo as inclusive as possible.”

For Saturday’s Wig Out at the Eagle, hostess Ruby Redd (aka Ray Matheson) emcees the all-day cabaret. In addition to two-dozen acts, DJs Vicki Powell and Jay McCracken will spin you every which way but loose.

“Drag Queens, Drag Kings, Bands, Burlesque Performers, and Freaks, sing to you, swing with you, and just do anything for you!” the promotional materials promise. “If you dare it, wear it. If you can wing it, bring it. Dress up to mess up.”

Look for the Parade of Wigs Walk Off, and thanks to collaborator Tony DiCaro, this year’s Wig Out has a connection to the legendary Wigwood festival, including performers from local acts to folks known for putting the wig into wigging out.

This is a rain-or-shine event. Originally scheduled for the Eagle’s back parking lot, Saturday’s forecast may prompt a move indoors. And in the spirit of MondoHomo itself, a Slip-N-Slide in the parking lot should do nicely.

Wig Out takes place rain or shine on Saturday, April 24 at the Atlanta Eagle. Mondo May Day takes place May 2 at Eyedrum Gallery, and the MondoHomo Dirty South Festival takes place May 27-31 at multiple locations across metro Atlanta. Visit mondohomo.com