Why was Mitchell Hall on ‘Project Runway’ at all? 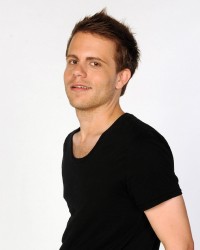 After a third time in the bottom in as many episodes, Georgia’s Mitchell Hall finally got kicked off last night’s episode of Lifetime’s “Project Runway.” What a relief for all self-respecting homos who call the Peach State home.

We admit, Mitchell seems like a nice guy, and he’s cute as a button. So we can at least breathe a sigh of relief for representing Southern Charm respectably, and perhaps feel a little sorry for him when he hangs his head in shame. But that’s about all we have nice to say.

Before the Aug. 20 premiere, the Savannah resident spent most of his interview with David magazine talking about shopping excursions to Atlanta, and how nice the other contestants and judges were on “Runway.” He told the magazine that he got into design because “there was a certain lack of what I thought people should be wearing.”

OK. Mitchell can tell people what to wear. That makes him a stylist, not a designer. What he neglected to mention in the interview is that he never really “got into design” at all. Despite a degree from the well-respected Savannah College of Art & Design, his simple aesthetic is born from an internship dressing mannequins at the Gap. His preferred neutral color palette is the product of colorblindness, not of choice. The boy can’t even sew.

So why were we subjected to his lack of talent for three weeks in the first place? Surely there were other, more deserving, actual designers who auditioned.

Maybe it’s the show’s fault. Maybe the move to Lifetime from Bravo after a year-long court battle required at least one non-threatening white gay boy for its female target audience to accept. We hope the show hasn’t lost it’s knack for who to keep. It’s not like Mitchell was even interesting in a “love to hate” ratings-booster kind of way — like, say, Vincent or Angela from Season 3.

Maybe the new audience wouldn’t stick with a show that kept designers with cutting edge ideas that didn’t pan out. Yes, Ari Fish and Malvin Vien, the two avante garde stylists kicked off before Hall, churned out a whole lot of crazy.

But no. “Runway” is still sacred to the gays. Whatever the show’s issues on the new network, we must blame Mitchell alone for our embarrassment. Maybe we can give him a break for episode one, when he had to scrap his original idea when the model didn’t match her submitted measurements. He had to send down the runway an Elizabethan collar with sheets of sheer nude fabric hanging off of it.

But those sloppy, ill-fitting shorts and oversized sweater in episode two? Mitchell told the judges, “I’ve never sewn a waistband before.” How long did he expect to get away with a complete lack of skills?

Last night was the biggest embarrassment. While Mitchell twitted about giggling in the workroom, criticizing the process of his gay teammate Ra’mon-Lawrence, and being frustrated because he couldn’t help, Ra’mon completed two fabulous dresses and an entire third look that was discarded — and won the challenge.

First, Mitchell told the judges, “Ra’mon did most of it.” When pressed, he came out with it. “He pretty much did it all.”

And there ya go. Watch the extended video of Ra’mon and Mitchell’s judging just to see how painful it actually was.

In two “Runway” firsts, the winning designer and the “Auf’d” contestant were on the same team, and Heidi Klum didn’t draw out the result. “Three strikes and you’re out” was all that needed to be said.

In his exit interview, a red-faced Mitchell went back to what he knows best: back-pedaling and being pitiful. He didn’t even say what most early eliminations do, that they are sorry America didn’t get a chance to see what they can do. We saw what Mitchell could do, and we’re not having it. Thank goodness.

Let’s hope the show’s upcoming episodes continue to cut the weeds and get down to some show-stoppers like seasons past. There is still plenty of real talent left, and plenty of other gay boys to root for like Christopher, Johnny, Nicolas and of course, the reigning challenge winner, Ra’mon.