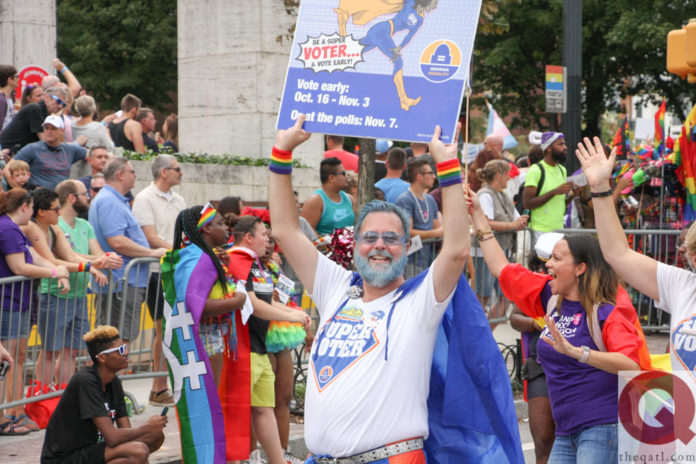 Just call Jeff Graham the head of the LGBT Super Voter brigade. Through his nearly decade as executive director of Georgia Equality and years of HIV activism before that, Graham knows elections and LGBT voters.

Earlier this month, he watched a field of 16 LGBTQ candidates run on ballots across North Georgia – likely the largest field of LGBTQ candidates in state history. Three won outright and three others face runoffs next month. It was an impressive election cycle for LGBT candidates, even if two-thirds of them didn’t win, he said.

“For the last few election cycles, we’ve been seeing more and more out LGBTQ folks wanting to run for public office, which I think is frankly just absolutely wonderful,” Graham said on a new episode of Podcast Q.

“As you’ve seen growing levels of acceptance, growing levels of engagement throughout the entire state of Georgia, the next logical step in that process is going to be having more LGBT folks that step in and run for office,” he added.

Graham also offered his reaction to the election of the first-ever transgender person to the Doraville City Council (Stephe Koontz), the three LGBT candidates in the Dec. 5 runoffs (De’Andre Pickett, Keisha Waites, Alex Wan) and the mayor’s race between Keisha Lance Bottoms and Mary Norwood.

Every vote counts. That’s the lesson behind the election of Koontz in Doraville. The transgender small business owner and church administrator won her race by six votes. Six. Koontz will become the only transgender elected official in Georgia.

“It really begins to pave the way for more transgender individuals to come forward in the future. But frankly Stephe’s race is also just a textbook example of why every single vote matters,” Graham said.

You can listen to the podcast on iTunes, Google Play and Stitcher.

On the new episode, Graham said Georgia Equality is considering its next steps in the mayor’s race and deciding if it will endorse Bottoms or Norwood. The organization endorsed Cathy Woolard, who placed third in the general election.

“We certainly need to hear in a little bit more detail what specifically they would prioritize. And not just some of the LGBT issues around supporting us in our fight against religious exemption laws that may come up in the legislature, but how will they enforce public safety issues,” Graham said.

Graham said the candidates should demonstrate that the Atlanta Police Department improves its treatment of minority populations.

(Photo: Jeff Graham as a Super Voter in the Atlanta Pride parade in October)