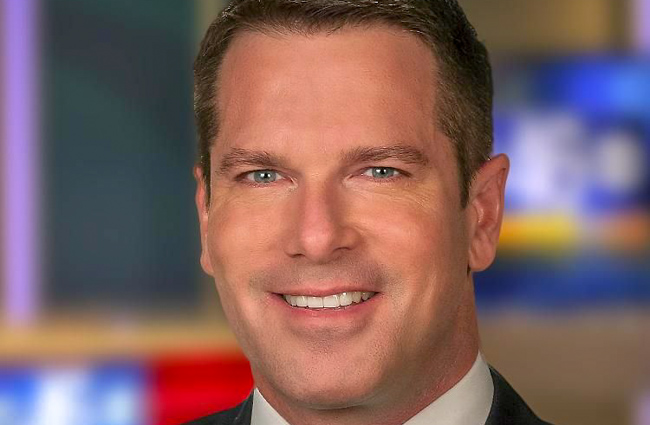 Newly named CBS46 anchor Thomas Roberts was so excited to be back “home” in Atlanta that the former MSNBC star split his pants on his first day at work.

“I ripped my pants in the seat about one hour before starting, and I was epically mortified because these are all my new colleagues, and I did it right in the middle of the newsroom and I was a little embarrassed,” Roberts said. “I powered through because there wasn’t needle and thread and enough time to deal with it, and my coat covered it, but it was a pretty big rip.”

The good-natured journalist took it in stride as he spoke with Project Q Atlanta about his departure from MSNBC, the importance of out media figures, and his new gig while house-hunting in Midtown.

Roberts co-anchors the 4 p.m., 6 p.m. and 11 p.m. newscasts alongside Sharon Reed on CBS46 and the 9 p.m. newscast on sister station Peachtree TV.

He left MSNBC last November after seeing his role diminish over time. His “Live with Thomas Roberts” was cancelled in December 2016 just three months after winning an Emmy for coverage of the U.S. Supreme Court’s decision legalizing marriage equality. He then anchored “MSNBC Live” on weekends until his departure.

“I think the tides had shifted with NBC and MSNBC in a lot of different and unique ways,” he said. “That was really difficult to watch up close and to see what was going on behind the scenes, because I loved my experience there and I was really proud of what I was able to achieve in that eight-year period.”

“But places and people and things change, and I really believe that my season there had come to an end,” he added. “It’s a reason, a season or a lifetime. I had a good reason to be there, and I had eight great seasons, but it wasn’t going to be for a lifetime.”

“That was a crazy time,” he remembered. “I had no idea what was about to happen to me. I just thought that if you tell the truth, everything’s fine — ‘the truth will set you free’ kind of thing. That was me with very rose-colored glasses on.”

But he said he wouldn’t change how things happened and that being out strengthens the bond with viewers by being able to talk about his personal life.

“That was something that most LGBTQ [media figures] did not feel confident in sharing — not only because there weren’t other people doing it, but because of any type of workplace retribution or feeling as if you would be singled out or potentially lose a livelihood or lose a promotion. People had a right to that and it was a real thing,” he said.

“It’s fantastic that we have so much representation now in 2018 across every landscape when you think about cable, network morning shows, network evening shows, whether they’re reporters, anchors or producers and executives, it’s never been a better time to stand up and be counted for,” he said.

It’s Roberts’ time to be counted for at CBS46, which he calls “a great product” that viewers should tune back into if they’ve wandered to other local stations.

Meanwhile, he plans to refamiliarize himself with an Atlanta that looks much different than it did in 2006. He’s staying in West Midtown for now and has already hit up neighborhood eateries Bocado, the Optimist and Bartaco.

“These are all places that I didn’t get to experience in our former life that I’m getting to eat well now, because I’m not a good cook,” he said. “If you opened up the fridge right now in the corporate apartment, you would find half-and-half and water bottles. It’s kind of pathetic.”

Atlanta’s newest anchor hopes to continue on the job with clothes intact, he said.

“I just pulled up at Suitsupply to have my pants fixed, so hopefully I won’t bust my ass out of my pair today.”