Why Cathy Woolard wants to be Atlanta’s next mayor 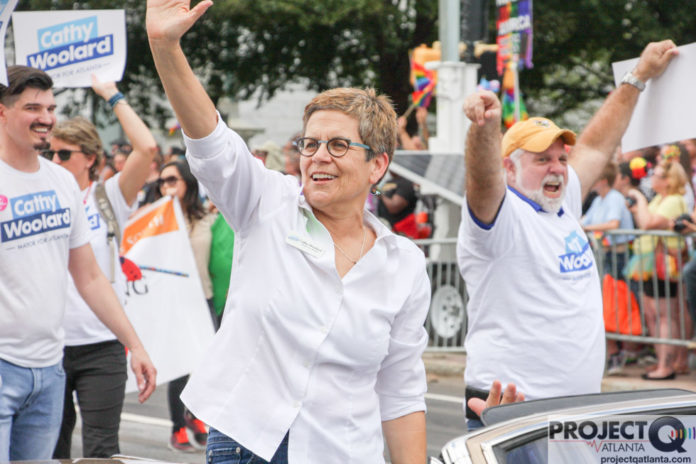 Cathy Woolard wants to be mayor. Sure, you might support her because she’d make history as Atlanta’s first openly gay leader. But Woolard wants your vote because, she argues, she can do the job.

On the premiere episode of Podcast Q, Woolard talks about her decades of work in social justice non-profits and making history as the first openly gay elected official in Georgia. She discusses LGBT issues facing the next mayor – HIV, homelessness, nightlife, Atlanta police and its gay top cop, and transgender people and other marginalized populations, among others – and her record on LGBT equality while in office. But her pitch for mayor boils down to this.

“It’s not necessarily because I’m gay, it’s because I know what I’m doing,” Woolard said.

Woolard said her mix of experience in city government and infrastructure, shepherding the Beltline’s start and working with social justice non-profits, “makes me uniquely qualified at this point and time to lead our city into the future.”

“I really think we’re at a critical time and I’ve got something to offer. But I would not have gotten into this race if I didn’t think I could win it,” Woolard said.

You can listen to Podcast Q below, or on iTunes, Google Play and Stitcher.

On the new podcast, Woolard also responds to LGBT critics who – nearly 15 years later – still blame her for a City Council vote in 2003 that forced bars to close an hour earlier. Woolard put the blame at the doorstep of Mary Norwood, who is leading the race for mayor.

“The first thing that people forget is that was Mary Norwood’s legislation – both times. She was the sponsor, she was insistent on that was the solution to a situation that was happening specifically in Buckhead but unfortunately chose to make it a citywide solution,” Woolard said.

A spat of high-profile killings after 3 a.m. in what was then a nightlife district in Buckhead Village pushed the City Council to action. Norwood proposed earlier closing times across the city, but Woolard said she advocated for a two-tier bar license system – one that would close neighborhood bars near single-family residences at midnight and another that would allow nightclubs to remain open 24-hours-a-day.

“People in our community were so angry about the mere prospect of Mary’s sort of bludgeon solution to this problem that they just really wanted me to vote no versus support me and trying to find the votes for a different solution,” Woolard said.

“It was really frustrating for me. It was probably the vote I regret the most but I had to vote with the vote that was in front of me,” Woolard added.

“I’m working as hard to get the vote of the LGBT community as any other one. I certainly think I have a record that is incomparable to anything collectively that the other candidates could say that they’ve done for the gay community,” Woolard said.