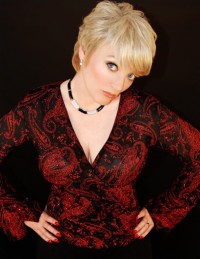 Michael Landon and Melissa Gilbert might have been the stars of “Little House on the Prairie,” but admit it—the only reason you watched this do-goody hokum every Monday night was to see what nastiness Nellie Oleson was going to inflict. The woman who played her brings “Confessions of a Prairie Bitch” to Outwrite on Wednesday.

For seven seasons, Alison Arngrim (top photo) played the imperious Nellie, gloating over her nice clothes, nice house and generally lording over the backwater that was Walnut Grove. Her golden ringlets and perfect pinafores belied the conniving, manipulator she was on the inside. In other words, Nellie was destined for gay icon status.

“Little House” has been off the air for nearly 30 years, but it’s in permanent reruns around the world and Arngrim opens the barn door to reveal all the bizarre behind-the-scenes drama and surrealism in her memoir “Confessions of a Prairie Bitch” (second photo).

Some of the more interesting tidbits: Landon was a drinker and didn’t wear underwear; Nellie’s on-screen husband was secretly gay; and saintly Melissa Sue Anderson, who played Laura Ingalls’ blind sister Mary, was the real bitch on the prairie. 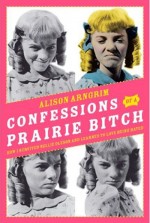 Off the set, Arngrim was dealing with her own surreal childhood. The daughter of a showbiz family, her father, Thor, was gay and Liberace’s talent manager, and her mother, Norma MacMillan, was the voice of Gumby, Casper the Friendly Ghost and nearly every other cartoon character on TV in the ‘60s. Her brother Stefan was a teen heartthrob, appearing in the “Land of the Giants” series.

However, Stefan was also sexually abusing his little sister, and Arngrim candidly writes about the assault in the memoir.

“I didn’t want to sugarcoat it,” Arngrim says. “It’s not graphically written, but emotionally explicit. I think the more graphic you are telling about the abuse, the less people are able to comprehend or understand it.”

Arngrim eventually got help from a therapist and went on to become an activist in the fight against child abuse. She led the charge in California to overturn its deplorable “incest exception law” that gave family members probation rather than jail time for abusing their children, siblings or any family member.

Unlike other child stars, Arngrim never became an addict, alcoholic or petty thief. When the acting jobs weren’t coming in, she worked as a temp, and her advocacy work for HIV/AIDS in California only deepened her gay icon status.

A regular on the LA comedy scene since she was a teen, Arngrim’s memoir sprang from her one-woman show of the same name. Raunchy and dishy, the show has been a hit around the world. She’s especially beloved in France.

“I burned my fingers off at the keyboard writing this thing,” she laughs. “It was 130,000 words when I finished; you would have had to haul the book out of the store with a hand truck. Luckily, my editor helped me get it to about 300 pages. The sequel is going to be called ‘Confessions 2: No Rest for the Wicked.’”

Arngrim’s father passed away last year, but he was able to read some of the memoir. A shameless self-promoter and “publicity-seeking missile,” one of the funniest parts of the book is Arngrim telling him she’s going to be on Larry King to discuss her abuse while advocating for the repeal of the incest law in California.

“Larry Fucking King for the entire hour! My god, I have to call everyone and tell them to watch,” he cries with delight.

His reaction to her inking the memoir deal was pretty much the same: “Harper Fucking Collins,” Arngrim repeats. “He was thrilled.”

One of the enduring legacies of the show is fan reaction when meeting Arngrim in person. In the book, there are tales of aborted meet-and-greets at the height of her “Little House” fame where children either ran in fear or, more disturbingly, attacked her.

“People refused to believe I was playing a character,” Arngrim says. “They thought I was Nellie. The fans have calmed down a bit, but a few weeks ago at a Las Vegas signing, this 50-year-old man kept asking, ‘Why are you being so nice? When did you become so nice?’”

Arngrim’s book completes a trifecta of “Little House”-related memoirs, with both Melissa Gilbert and Melissa Sue Anderson having recently published their recollections. “If you had told me back then that we’d still be talking about ‘Little House’ as three middle-aged broads, I would have said you were insane.”

Collin Kelley is a poet, Atlanta-based journalist and author of the novel “Conquering Venus.” Follow him on the Modern Confessional blog at collinkelley.com.