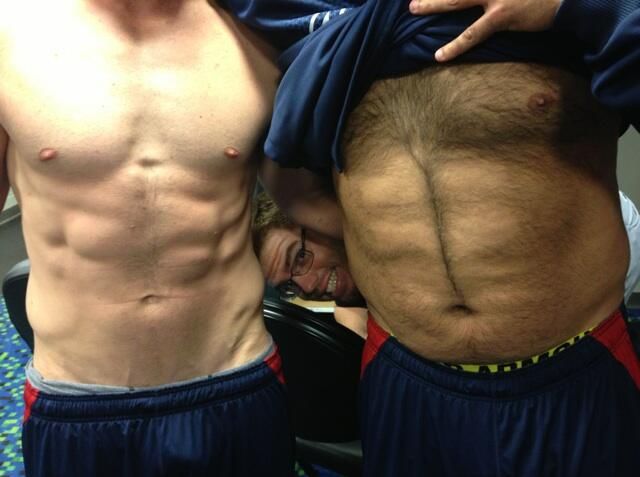 The Atlanta Braves, ever sensitive to the team's image among LGBT fans, ought to try more of this: Elliot Johnson tweeting shirtless pics of his teammates.

The newly-acquired second baseman sexed up his more than 17,000 Twitter followers on Monday with a quiz asking who's got the better abs -- teammates Dan Uggla or Gerald Laird. Better yet, the tweet included the shirtless jocks standing next to one another. For the sake of comparison. No homo.

And that head placed exactly where you want yours? That's Braves first baseman Freddie Freeman, who gets points for the most excellent photobomb.

Johnson hasn't tweeted since, so there's no official ruling on who's the most ablicious. But really, bears will be hot for Laird and Uggla is now the mascot for muscled manscaped gays everywhere.

But even this pic can't outdo the abs and coffee cup covered package of baseball jock (and selfie expert) Grady Sizemore. Or the stripped down assets of former Atlanta Falcons jock Ray Edwards.