Where you should celebrate Cinco de Mayo in gay Atlanta 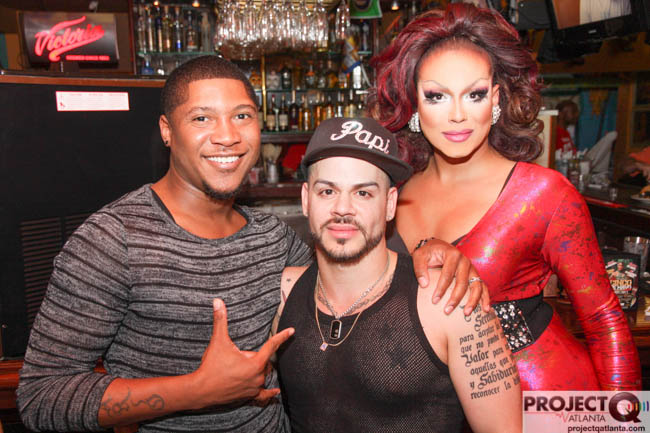 Friday nights are great for going out and having fun, but what can make this particular Friday night stand out from all the others? When Cinco de Mayo falls on a Friday, it’s a perfect mix for a great night.

When the Mexican army managed to defeat invading French forces 155 years ago, it’s doubtful that anyone involved would imagine that the day would be celebrated so many years later. These days, though, Cinco de Mayo is more of a celebration of Mexican and Hispanic culture, with a heavy dose of something authentically American: commercialization. Mix that with gay Atlanta’s love of partying, and you get one of the biggest days for a fiesta in the gayborhood.

One of the biggest parties every year is at Las Margaritas, the Cheshire Bridge Road restaurant owned by Oscar “Papi” Valdivieso (photo center) that’s always stacked with events. This year, that includes music from DJ Emerich and DJ Ceelos, along with a performance by Alissah Brooks. Papi's Annual Outdoor Cinco Extravaganza also includes a Frida Kahlo lookalike contest, with the winner snagging $500. The whole shebang is hosted by MC Miss Peaches, and the event even benefits Joining Hearts. It's always big.

“Cinco has arrived, and we invite you to get Cincoed con us,” Valdivieso says. “We are proud and excited this year [that] the door and business will be benefitting Joining Hearts, as we give back to the community that gives to us.”

Also joining in the festivities again this year: Ten Atlanta, which celebrates with its 5th Annual Cinco de Mayo Celebration with music from DJs Daryl Cox and Rob Reum. Sponsors of the evening include Corona Extra and Jose Cuervo, so expect plenty of the beer and tequila you know you want. And boys.

At Burkhart's, the bar kicks its Cinco de Mayo Celebration into high gear with, of course, tequila specials.

“Burkhart's loves a reason to party and Cinco de Mayo is always fun with our Latin boys – DJ Karlitos kicks off the party with the best of Latin beats. We will feature Freda Kahlo margaritas and have lots of giveaways,” says General Manager Don Hunnewell.

Woofs is also stepping up for the Friday fun of Cinco de Mayo with its own party, along with drink and food specials.

“Great drinks, tasty food, good people. Where else would you want to be,” says Aaron Born, the general manager of the LGBT sports bar. “Everybody is welcome at Woofs. Can I get an Amen!”

Your Cinco de Mayo celebration doesn't end when the sun goes down. Heretic hosts its own holiday-themed Pump Party with DJ Stan Jackson.