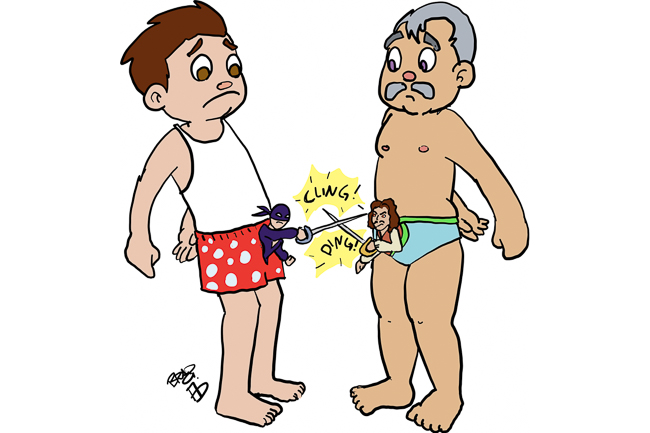 Two tops don’t necessarily make a wrong. What may be in order is more fun, less categorizing, and a whole lot of communication.

I’ve been with my boyfriend for almost a year, and for the first time in my life, I’m not questioning whether the love is real. We are definitely connected on a higher level than I’ve ever experienced.

There is one hitch, though: We’re both tops. We click on every level but that one.

I’ve bottomed a couple times, but when I bring up reciprocation, we argue. When I’m not willing to do it, it’s like a sword fight down there. I don’t want to be in this stalemate forever, and I definitely don’t want to lose this relationship.

The first thing to discuss as honestly and openly as possible is whether what you are after is even a possibility for him. There are ways to live with “no” and maintain your relationship, but if you act like “no” means “maybe” or “with the right strategy,” you’ve got bigger issues than sex in your relationship.

If you’re in the land of “absolutely not,” it may be a deal breaker for some couples, and that can be a harsh truth. But long before you end up at that crossroads, try learning to love the “sword fight.” Focus on other sexual situations you both enjoy, or entertain a third who loves bottoming. Those are just just a couple of options. Stop focusing on the problem and turn your minds toward solutions.

Forget labels. “I’m not going to be the bottom in this relationship” triggers every emotional hot button on both sides, not to mention puts negative stigma on bottoming. What if no one was a “top” or a “bottom” and everyone just wanted to have sex? Make it about desire.

Tap your sexual super powers. What turns him on about you? Ask him and give it to him. If it’s your chest, walk around shirtless more. The noises you make in bed? Make more. Have him do your stuff too, and everyone will feel more attractive and attracted.

Emphasize reciprocity. Partners don’t just do things to each other in bed, they do things for each other.

Commit to consider. First, you commit to not even try topping him, as he openly considers the possibility. The lack of pressure “in the moment” takes the anxiety of anticipation out of the equation. Trust is a key issue. Don’t violate it.

Try it. After a period of the above steps and a thorough cleansing — and based solely on his schedule — give penetration a shot. To support an environment of zero pressure, put in place caveats that false starts, time outs and rainchecks are totally OK.

Q Advice is intended for entertainment, not counseling. Send your burning Qs to [email protected].

A version of this column also appeared in Q ATLus magazine. Read the issue here:

Pick us up each week at LGBTQ and allied venues, and find new content here every day.