When the hard truth is the hardest possible option 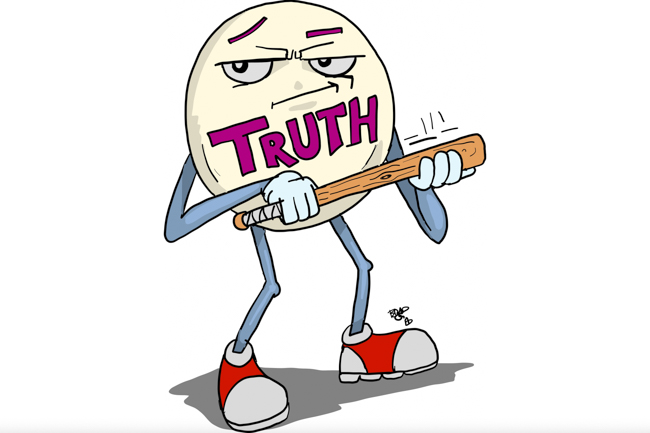 There I am, minding my own business at a work party, when the sketchiest of sketchy queens at our office heads toward me. He starts as his usual annoying self, but out of nowhere pivots to hitting on me.

The details of the commentary are gross and over the top. I didn’t feel threatened at any point, but I did feel cornered, and social signals weren’t working to make him stop. Not that I act quite as badly as he did, but the experience definitely changed my own approach to someone I’m attracted to, especially when I swing and strike out.

Sometimes it feels like it’s never the ones who we want hitting on us who do it, right? That said, coworkers or not, and dangerous or not, the behavior does need to stop.

People in similar situations can try shut-down statements like, “Let me stop you right there.” Start those the moment you sense unwanted advances, and assert strongly and specifically that you’re uninterested and unavailable. Avoid hints. Be clear without being rude.

If he doesn’t stop, move. You’re never cornered so much at a crowded party that you can’t make excuses, push past him, and walk away. Call someone over if you can’t.

This wasn’t your case, but while we’re on the subject, if anyone, anywhere, any time becomes overbearing, intimidating or forceful, don’t tolerate it. Say definitively, “Stop this,” and if need be, have someone else step in, including an authority. Be willing to embarrass everyone if you feel endangered.

I’ve always been a cheater. I met my boyfriend cheating on the ex. I thought I had grown out of it, but I recently began an affair. Why does it feel so good to keep secrets and sneak around? Also, I have no remorse. Am I a sociopath?

Here’s the hard truth. You may not be a sociopath, but your narcissism is showing. Adding excitement to your life at the risk of someone else’s feelings is mean. If the thrill of getting caught excites you, you’re in luck: You will.

How do you politely tell your one-night stand that they’re not clean “down there”? My spouse and I were entertaining a “friend,” and a frothy mixture dropped on the carpet. The person didn’t see because they were face down in a pillow, but we both did. Awkward.

You know the saying: Shit happens. No matter how “prepared” we think we are, most people have experienced unexpected malfunctions. If the mood is killed, say why. Don’t make a big deal out of it, and just explain what’s up if it’s too much to continue. Maybe invest in some spot remover.

Q Advice is for entertainment, not professional counseling. Send your burning Qs to [email protected].

After knockout rounds that lasted all year, the monthly winners of the New Faces contest threw down their best numbers in a pageant for...
Read more

After a three-decade run and a legendary international reputation, gay Atlanta's only all-male all-nude bar announced Monday that its doors will shutter permanently on...
Read more
Load more
17,446FansLike
7,001FollowersFollow
7,682FollowersFollow
MOST POPULAR