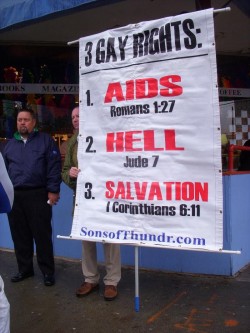 Nothing says Atlanta Pride like rain and protesters. On Saturday, there was a little of both though the forecast calls for at least one to not be around on Sunday for the parade and festivities.

A handful of anti-gay protesters spread their message at the end of the rainbow, otherwise known as the intersection of 10th Street and Piedmont Avenue in front of Outwrite Bookstore & Coffeehouse. Thy joyfully alerted anyone who would listen that gay folks have a right to AIDS and hell. How nice.

Just as fervent, some Bible-toting, anti-gay people worked Piedmont Park just outside the gates, letting Pride-goers know of our impending doom. As if the soaking showers throughout the day weren’t enough.

But this year, members of gay-friendly churches mounted a counteroffensive.

For the past two years, local churches who affirm gays have mounted a counteroffensive. Their members stand near the conservatives, holding signs saying that God accepts gays just as they are.

“We are letting people know that there is an alternative message,” said Lisa Costen of Atlanta.

The battling groups reflect much of what is happening inside American Christianity, as churches grapple with how to treat gay members. Some reject them. Some welcome them with open arms. Others are trying to find a balance.

Inside the park, local churches, from a born-again, charismatic gay congregation to mainline churches, such as the Episcopal Church, have taken vendors’ booths and invite gays in without demanding they change.

This year, two evangelical ministers who are walking a middle path between outright condemnation and full affirmation of gay people took a booth and surprised those stopping by with apologies.