What’s in a name? Trans Georgians reveal how they chose a new one 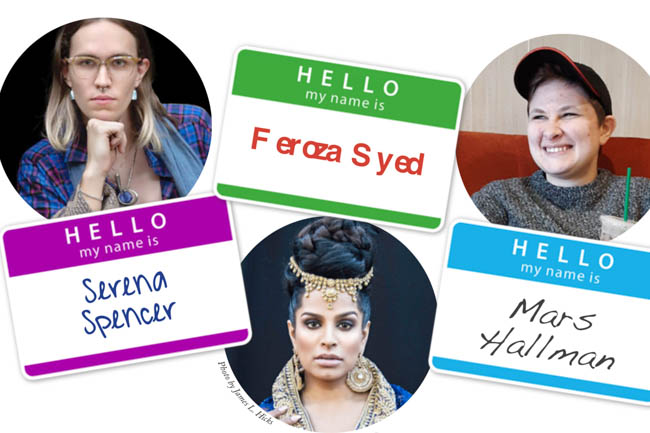 Some want to honor their family heritage. Others look to online gaming profiles or their favorite prime time soap opera. Many don’t want to make too big of a change at all.

For transgender people, choosing a new name can often be a profound experience. It’s what people call you. It’s the title under which all perceptions of you are listed — by you and by others.

Mars Hallman was 15 when he decided to change his name. He had come out as non-binary and no longer identified with the name given to him at birth.

“I've always loved looking at the night sky, and Mars is always the first thing I look for,” Hallman told Q. “It's nice to see myself every time I look up at the stars.”

Many transgender people prefer to pick some variation on the name given to them at birth.

“I started my social transition in May of 2006 and chose my new name Christian, which used to be Christine, that same year or early in 2007,” said Atlanta resident Christian Zsilavetz. “I wanted to still be Chris to partially honor my family and I liked being Chris. Very few people called me Christine except for a few bosses and the doctor's office, so being Chris felt good to me as a gender-neutral name.”

But Zsilavetz got at least one unexpected reaction from friends after changing his name.

“A lot of my friends who knew me as Chris before wanted to call me Christian instead of Chris because it made it easier for them to remember the right pronouns moving forward, which I thought was very loving of them,” he said.

Zsilavetz — who founded Pride School Atlanta, which closed in September — found another unexpected result from choosing the name he did, courtesy of anti-LGBTQ people.

“What are the amusing things to me is that I really don't identify so much as a Christian in a religious sense, but the choice of my name has actually been used against me by people from the far right who sought to slam my efforts in forming Pride School Atlanta, so go figure,” he said.

Doraville City Councilmember Stephe Koontz also wanted a name close to her old one, and she found it from an unlikely source.

“I used the name I came up with for playing online games a long time ago,” she said. “It's kind of a weird way of spelling Steph, but that was taken and Stephe wasn't.”

Tracee McDaniel changed her name in 1987 while working a summer job at a seafood restaurant in Myrtle Beach, S.C.

“I chose my first name because it was similar to my birth name, and I chose my middle name Dominique after Diahann Carroll’s ‘Dynasty’ character Dominique Deveraux,” she said.

Transgender activist Feroza Syed also wanted a similar name as her birth name, more so because of family pressures.

“I knew it would be hard for my family to call me something very different from my original name,” she said. “I also had only met one Feroza (which was the female version of my name) in my life, so I went with what was easy and unique.”

“Since I didn't think my family would honor my request to be called Shabana, or Saira, or any other names I had thought up, it was simple. Give them a variation of your current name that makes it easier for them. In retrospect, I really see how I was so much more concerned with their comfort than choosing something I was happy with,” she added.

Of Children’s Books and Math Time

For Lupa Brandt, choosing her new name was a numbers game — a numerology game to be exact.

She used a complex system that involved adding all the numbers in her birthdate and eventually came up with “her number.” She then used a numerology chart to do the rest.

“Using the chart, I made a long list of female names from reading, watching TV, etc. and added their results up,” said Brandt, the community outreach organizer for Transcending Barriers Atlanta. “Those that matched my number, I added to a list of names to choose from.”

The process took over a year.

Kitty Killington didn’t have to look as far when choosing her first name after coming out as transgender. Her wife called her Kitty as a nickname.

“I ended up deciding on it because it meant that when I do have my documents done, I can make my name Katherine and I'll be Kitty for short,” she said. “My best friend's name is Kathryn and she's been my friend for almost 20 years, and my grandmother and little sister are both named Catherine. So, it feels a bit like an homage to the people I love.”

Tougher was picking a middle name. But it was freeing in a way.

“For the record, my middle name is Stellaluna, and I stole it from a children's book about a bat. It took me like a year to decide, mostly because I know that nobody ever really sees your middle name and I could do anything I wanted with it. Too many options [laughs],” she said.

Atlanta transgender activist Monica Helms had long decided on her new name by the time she changed it in 1997.

“I actually came up with this name 15 years earlier when I was crossdressing, so it was easy,” said Helms, who designed the transgender flag used worldwide today. “For my first name, I didn’t like the female derivatives of ‘Robert’ and I wanted a truly female name. I changed my last name because the one I had was always mispronounced and I wanted something simple, but that started with the same letter.”

It took transgender Atlanta resident Vega Darling a long time to choose his name, having never felt at home in the name his parents gave him. Like Mars Hallman, he looked skyward.

“I chose a first name that reflects my Irish heritage. I chose a middle name to honor my mother — it is the male version of my mother's first and middle names,” he said. “I chose a second middle name — the name that I use in daily life — to reflect my values. The name I chose is the name of the brightest star in Lyra — the musical constellation.”

Most of Darling’s family is adopted, and his mother changed her name after divorcing, so changing the last name wasn’t as big of a deal as it would have been otherwise. But choosing and embracing a new name was.

The Business of Name Changing

Choosing a name is one thing, but changing it on your driver’s license and other documents is an entirely different process.

To change your name in Georgia, you must submit a petition to your local Superior Court detailing the reasons why you want to make the change. Within a week after filing the petition, you need to post a notice in the local newspaper stating that you intend to change your name, and then run the notice once a week for four weeks.

If the court approves the change, you can then move on to changing it on your Social Security card, driver’s license and passport, which each have their own rules for doing so.

Hallman said getting his name changed in court was “fairly straightforward,” but the rest wasn’t.

“Having that change reflected across all my legal documents took a long time, a lot of driving and waiting and mailing, and even dealing with outright illegal acts of transphobia,” he said. “There was a full two years between getting my court order and getting a new social security card with my correct name.

Koontz hired a lawyer to help her with the process.

“I didn't want to deal with the court system and figured if we ran up against a bigoted judge, he might be less likely to deny it if a lawyer was presenting it,” she said. “Changing my name on all my documents and accounts wasn't hard, just was time consuming.”

The process took Syed a couple of months, and the ad cost about $100.

“It wasn't horrible, but it was tedious,” she said. “At the time it was a lot of money for me, but well worth having my documents changed.”

Spencer said the process was “relatively easy, albeit rather expensive and time-consuming.”

She filled out the paperwork to change her name and ran the ad for a month.

“Afterward, I was seen by a judge in a small court, answered some questions about attempting to defraud the state, avoid child support payments, etc. Once I was deemed fit, I paid the proper fees and my name was legally changed,” she said.

A version of this feature originally ran in Q magazine. Read the latest issue below.