What not to wear: gay ATL Halloween costumes

When it comes to Halloween, you have lots of choices for gay dance parties and fundraisers in Atlanta. You also have plenty of options better than the gay standards for costumes.

Halloween may be the biggest gay holiday second only to Pride, so know going in that there is some stiff competition at costume contests with extra incentive to kick some masquerade ass.

There’s a $500 prize at the annual Carnevale Myths and Legends (top photo, see more) for Jerusalem House on Oct. 22, a $250 award at NFFLA’s Boo-T Ball: “CarnEVIL” Resurrection fundraiser at Opera for Open Hand on Oct. 28, another 500 smackers to the best at Circus Circuit for Joining Hearts on Oct. 29, and iPads for the winning looks at Discoween with B52 Fred Schneider benefiting Canine Companions for Independence on Oct. 28 at Paris on Ponce.

So are you up to the challenge? Here are some costume dos and don’ts to help you think it through.

In a rapidly changing gay rights world, no one can blame you for going this route. But if you’re thinking of recycling that Sarah Palin suit (second photo), ditching the glasses, unpinning your wig and going as a drag Michele Bachmann, you’re just lazy. No, we don’t care if you make your boyfriend go as Bachmann’s ex-gay, almost-gay, kinda-gay, not really gay husband.

You’re even less impressive when you just throw on a suit and tie trying to approximate some other GOP hopeful. Rule of thumb: If you need a sign to tell people who you are, you didn’t try hard enough.

We also anticipate quite a rash of “Occupy (This)” queens. If you forego bathing and simply scrawl out an “I’m upset/Deal with me” sign to go as a 99-percenter (third photo), take it to an actual protest like the Radical Faeries in Woodruff Park for “Occupy Atlanta” and make a real statement.

Out, proud and making headlines 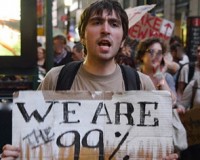 It’s awesome that so many role models are coming out. But the costume recycling no-no also goes for that Army uniform you’re itching to wear and make it easy. We’re inundated with gay soldiers each year, but the headline-rrific repeal of DADT doesn’t make your lame attempt any fresher.

Speaking of newsmakers, we cringe at how many lesbians are going to attempt Rachel Maddow, so don’t try it unless you know you can pull it off flawlessly. Yes, boys, that goes for Maddow’s newly minted gay colleagues Don Lemon and Dan Kloeffler and the is-he (yes) or-isn’t-he Anderson Cooper: If you’re going to do it, be sure to nail it.

You’ll face some tough competition, but you may be tempted to riff on the recent boob-tube trends of “Pan Am,” “Mad Men,” or the hot but already cancelled “Playboy Club.” You’ll have to put that brain to work and figure a way to make your version of any of these better than the rest.

Gay Atlanta City Council member Alex Wan did flight attendant at Carnevale last year, but with a little forethought, you and yours can still turn heads just like the gam-tastic line of “Pan Am” beauties and make it your own.

We’re all for showing off that body of yours, and even if we weren’t, you’d do it anyway. But please be original. Get credit beyond a few leers by not doing angel wings (so done), gladiator (unless you want people to hound you for shots thinking you’re a Rokk Vodka Boy, fourth photo), or heaven forbid, pajamas or a bath towel with slippers, whore.

With any of those, you’ll spend the evening doing the head nod to your same-idea brethren all night and turning to wince after passing the ones that do it better than you.

And lord please, if you don’t have “that body” in the first place, remember that just because you put “Sexy” in front of “doctor,” “cat,” “aviator,” “cowboy,” “devil,” “vampire,” “matador” or “cop” doesn’t make it so. In your case, spray-painting fake abs and cutting a standard costume into booty shorts won’t help.

Yes, the Circus Circuit party on Oct. 29 is specifically themed, but if you haven’t been paying attention thus far, all of the rules about being original and skimpy-for-skimpy-sake still apply.

And in case you haven’t noticed, the MISTER Center’s Chandler Bearden has “Ringmaster” and “Lion Tamer” covered, and he does it better than you. The hottie with the body did find an original way to do “Sexy (That)” and show off his assets in a recent spate of public appearances in top hat, tails, tights and no shirt (fifth photo, left). Yep, adding cohorts for a group theme has been done, too: Bearden’s boyfriend already has you beat on “Sexy Lion” (right).

Yes, it’s too soon. No matter how much you miss Steve Jobs, Elizabeth Taylor, Amy Winehouse or even Jimmy Kimmle’s Uncle Frank, adding zombie makeup to last year’s costume is not only in poor taste, you twisted bastard, but it’s too easy. Nope. Don’t care how much your rendition of “Rehab” slays ‘em at parties.

In fact, zombies in general are so last week. 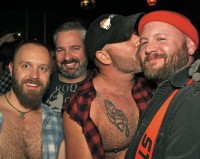 In short, be original, and in gay Atlanta, we admit that takes some doing. You might be a has-been if you go with: Smoking Pregnant Kim Zolciak, Justin Bieber Lesbian just because you already have his (former) hair, or Lumberjack that you can find at Mary’s on any given night of the week (bottom photo).

Here’s sending our Halloween best to you while you apply yourself to the task. What costume ideas are you loathe to see yet again this year? What about ideas for good ones to share? Let us know in the comments section.

Other parties with costume contests include Bedlam’s WHORified Halloween at My Sisters’ Room on Oct. 28. the infamous Scary Mary’s House of Horrors Spooky Disco at Mary’s on Oct. 29, and the Trick Your Treat Halloween Bash at Cockpit on Oct. 29. Keep an eye on our interactive Gay Agenda calendar of events as more Halloween revelers reveal their plans.