What you need to know about ‘Becoming A Man’ 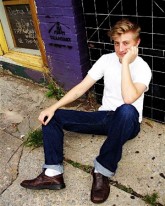 It’s easy to be impressed by Scott Turner Schofield. The prolific author, playwright, trans man and insightful performance artist talks about coming home to Atlanta with his one-man show this Thursday through Sunday at 7 Stages.

Through sheer tenacity and a realistic sense of self, Schofield (top photo) and his varied works keep popping up on our radar with a personalized brand of activism that is as thoughtful and informative as it is funny and entertaining.

After wowing audiences with tours of his “Underground TRANSit” for years, his “Becoming a Man in 127 Easy Steps” (bottom photos) ups his stage game even further with the evolution of a show Schofield describes as a “Choose-Your-Own-Adventure theater show featuring aerial acrobatics and multimedia storytelling. Together, performer and audience decide the sequence of events every night, choosing just a few of the 127 stories that a guy who was born a girl has to tell.”

In other words, it’s a different show every night. And it happens to be a brilliant show to boot. Even guys born as guys might learn a thing or two about what it really means to “become a man.” With just four performances this week— Thursday, Friday, Saturday and Sunday—we strongly suggest you get there at least once. And hurry. It’s expected to sell out.

Topping yourself is a feat when, like Shofield, you’re also a Lambda Literary Award finalist (“Two Truths and A Lie”), a former Atlanta Pride grand marshal, reality show contestant, and a self-proclaimed “man who was a woman, a lesbian turned straight guy who is usually taken for a gay teenager. A former debutante and homecoming queen coming out in the Deep South…” 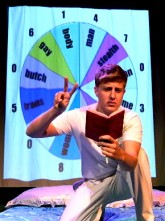 “Why 127? Well, it’s a prime number; and it’s kind of a complicated mouthful, like me; oh, and it’s part of my Social Security number, which apparently says EVERYTHING about who I am. I am just waiting for someone to steal MY identity!”?

Even as writers, we at Project Q know when to let the subject tell his own story. We gave Schofield a few springboard questions and let him do the talking.

Project Q Atlanta: Any changes/evolutions for the show this time around?
Scott Turner Schofield: I have a bunch of new stories this time around — a lot has happened! Hollywood, international touring, experimenting with my sexuality…

What keeps the show fresh for you night after night?
The format for one, and then the audience. What I love about Atlanta is that people here know me: y’all aren’t afraid to laugh or engage with me onstage. The shows are the best when people talk back or don’t hold back laughing, or when people listen really intently. If the audience is with me then I am my most fresh and present onstage.

Why is this show important on a social level?
There aren’t many positive representations of transgender people out there. In fact, I’ve been told that “127” is the only story out there that contemplates the death of a transperson without talking about murder.

I don’t want to imagine that could be true, but if it is, that’s deep! In this show, we assume a long life and a natural death, but LIFE and JOY and COMPLEXITY are the main ingredients.

But really, for anybody to be able to see themselves in a story onstage, it’s a powerful experience. People of all kinds of identities (men, women, trans, non-trans, frat boys, elders, gay, straight, etc.) tell me they find themselves in the stories I tell. So I guess that’s socially important.

How is it rewarding personally?
I just love performing and making people laugh. Every time I tell these stories, I am so present, because I have to be. It’s new every time. I learn so much in the moment about how to be a better storyteller, a better performer. I feel so lucky to have that opportunity.

Don’t let us hinder what you think is important to talk about when it comes to bringing “127 Steps” back to the ATL…
I guess I want to reiterate that this will be a totally different show from what people have seen: it’s not a rerun! And I want to offer this run as a love letter to Atlanta, where friends and audiences and press have supported me to do my best work. Y’all have given me the confidence not only to become a man, but to travel the world and talk about it. The more I am away, the more I know that’s true.

Also, given how tough things have been here–with the Eagle and the Westboro KKKlan, lately–I want folks to know that this will be a really fun time where they can come and hear stories that reflect parts of their real lives, told in an honoring and uplifting and very real way.

Come on out and remember why we each choose to come out and be ourselves proudly every day, whoever we are, at whatever step in our process.

“Becoming a Man in 127 Easy Steps” runs at 7 Stages Thursday, May 20 through Sunday, May 23. Click the show and theater names for ticket information. Follow Scott Turner Schofield on Twitter, or learn more about him on his website.