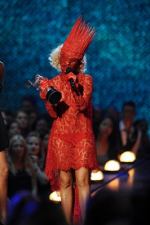 With the full pressure of Pride-O-Ween, it’s not enough to just do drag or slap on military duds this year. We want your ideas to make it perfectly gay, and offer a few kick-start suggestions.

Sure, it’s easy to wear a red Speedo to a simple June Pride, but Pride-O-Weenies will laugh your October shrinkage out of the park.

This queer year, we’re sure to be goo-goo for Gaga. Spangle suggests the queer icon as a costume you can make “simple and cheap.” But we warn you: Someone is going to be the best Lady Gaga, and you want it to be you. Will you be one of the four ‘VMA’ Gagas, the brunette Gaga, or the ‘Idol’ Zipper-Eye Gaga?

May the best Gaga win.

Other icons making the list for both men and women: Put on some horn-rims and a black suit and be Rachel Maddow (photo, right), or dig up that Golden Girls costume and give it a 2009 twist with some fake blood: Voila! an Undead Bea Arthur.

And then there’s cues from the headlines, such as Octomom and Balloon Boy. Our favorite current event costume: Blacken your eye, put your arm in a makeshift sling, and tell people that your insurance company considers domestic violence a pre-existing condition.

One boring but kinda sexy idea out there is one we’d like to update: Don’t just go as Michael Phelps (bottom photo); that’s so 2008. Guys with—actual, not online—swimmers’ builds can put on swim pants and a cap, drape in gold medals and an American flag–and for 2009, carry a big ol’ bong. Your call on filling it with actual weed. 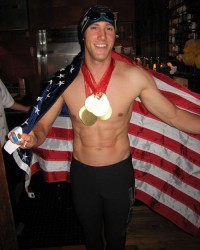 Sure, go ahead and wear your rainbow boxers and a smile. You bet, we’ll still love your hot bod in Army pants with a canteen or a Navy uniform. And yes, we’ll still gawk shamelessly at a shirtless ninja or a robot sex slave in tin-foil, but we’ll respect you a little less.

OK, fine. We were already objectifying you in those scenarios anyway. Who needs respect, right?

But seriously, we want to know what your plans are. Leave a comment below this story, and we’ll post the best ideas in time for Pride-O-Ween.

As our final nod to Halloween hilarity, we suggest turning the tables. If you’re femme, dress butch. Butchies? Go all out as a ballerina. Which brings us to this video from the Onion, a satire on how to butch up your effeminate son for Halloween. It’s the Kick-ass Clip of the Week: