What it really takes to turn a restaurant gay 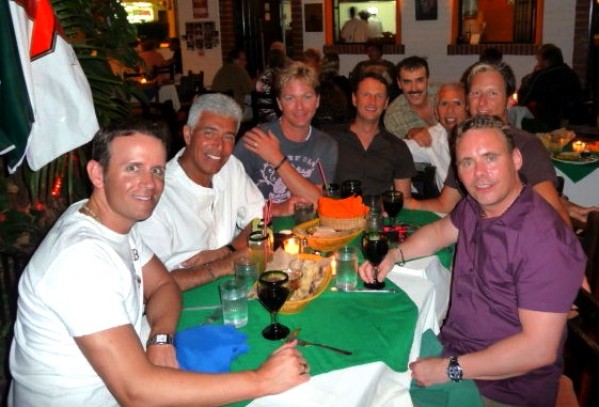 Unlike the old joke adage about straight guys, it may require more than a six pack to make a regular eatery gay. Here are some people, places and things to look for. Why does Atlanta even need “gay restaurants,” anyway? What with increasing acceptance and a move by some toward mainstream assimilation, some argue that dining spots for gay people are unnecessary. But everyone would agree that they exist, so we investigate. Gay Creative Loafing contributor Cliff Bostock takes on the concept in a recent review of Roxx and its oh-so-gay clientele. Unwilling to wait an hour for the gay magnet that is Casa Grande on Friday night, he and his friends searched out another “gay place.” Their criteria? It clearly doesn’t have to be gay owned like Radial Café or Las Margaritas, though that doesn’t hurt. But a restaurant striving to be gay, according to Bostock’s friends, should contain the following key ingredients: • A place to see and be seen. • Cheaper than cheap prices. • A gay staff or, “at the minimum, staff that can fake it.” • Location, location, location. Near gay-centric Midtown is preferred.

You make it gay

Good list, but we say the key ingredient is you. Gay people are the fabulousness that makes anyplace gay. Some might say that Joe’s (even if you think the food sucks), Einstein’s, Gilbert’s (which may be expanding into Outwrite’s former home), Hobnob, Cowtippers, Roasters and the like provide a “safe space” for gay gaggles to be, well, gay. Pish to that. Be gay in any Atlanta restaurant – or mini golf course, or movie theater, or dog park – you want, and invite all your friends. Assimilation or not, what we’re looking for is an establishment where we can fraternize with other gay people. We still have a unique culture that seeks out its own, and hey, who doesn't mind checking out cuties without wondering whether they bat for our team?

Note to restaurant owners: We eat out a lot. Especially those of us who are single, when it can be cheaper, and certainly faster, to grab your burger or chicken fingers than to cook for one and eat alone. Market to us, and we will spend money with you. In our intense personal research on the matter, it doesn’t hurt to give back to gay causes and host gay events, which most of the above-named restaurants do regularly. They court our business, and we like that. It makes dollars and cents, and hello, that just makes sense.

Cocktails without the smoke

If the gay folks make it gay, like any gay worth their gayness knows, it pretty much ain’t happening until you add cocktails – or at least the opportunity for them. Like the straight-guy-for-a-night analogy, beer does help. Martinis are even better. The gayest restaurants are in fact de-facto gay bars. And not even the staunchest mainstream assimilationists among us would argue that we don’t need those anymore. It's Blake’s with table service, or any of your favorite watering holes without the smokers, too. Creative Loafing provided the starter list and we added our assertion that, like so many facets of life in Atlanta, the people bring the gay with or without cocktails. Now it's your turn. What would you add to the list? Let us know in our comments section below.