What is Sunday Funday and why should I care? 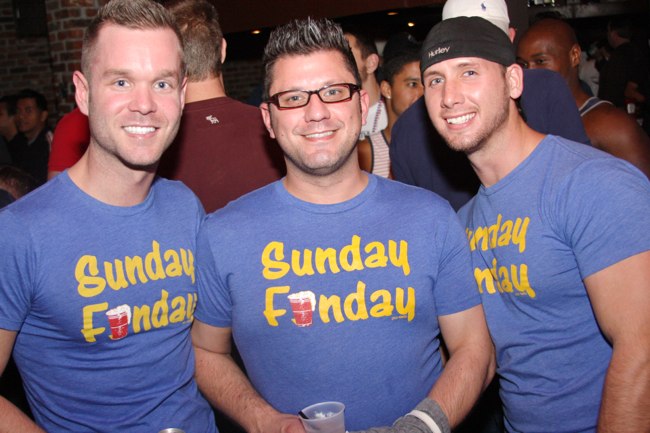 Spring is here. Patios are open. And gay boys are pulling out Sunday Funday t-shirts. But you still have no idea what this fun is all about. It’s okay, party-pooper, here is a detailed Sunday Funday explainer, just in time to guide your gay weekend.

What is Sunday Funday?

It’s no secret that the gays can turn most anything into a celebration, complete with cocktails. So combine warm weather, sunny afternoons and bars with patios, decks and windows that give the inside an outdoor feel, and you’ve planted the seeds for a perfect afternoon. Sunday Funday has been around in Midtown in some form or another for years. Our favorite barfly Lynn Barfield -- a fixture in the gay scene who works security at Blake’s -- reminds us that back in the day, Sunday Funday opened at Blake’s, moved to the Armory for the Armorettes show and then next door to Backstreet to cap the evening. Now, Sunday Funday has more of an outdoor feel. Open up those large windows at Blake’s and Gilbert’s, head to the patio of 5 Napkin -- which is exactly where the gays were last Sunday for a Joining Hearts benefit -- take to the expanded deck of Zocalo, or kick back on the expansive outdoor area of Joe’s.

So Sunday Funday is a 10th Street sort of thing?

No, girl. The block that runs from Blake’s to Zocalo provides probably the most visible of Sunday Funday displays. But it works itself over to Joe’s and other Midtown spots. A gaggle of gay boys with cocktails can even take their own Sunday Funday poolside. More than that, Sunday Funday is a state of mind rather a particular place. Wes Berry -- a board member for Joining Hearts, which offers its own Sunday Funday event on April 15 with its Change of Seasons Tea Dance -- explains it like this. “It’s been my experience wherever I go in town and out of town that the gay boys love their Sunday Fundays. I do remember the good ole days of t-dances and more planned activities [but] now it seems that the majority of activities are random outings with friends,” Berry says. Adam Ellis, one of the founders of TakeOver Atlanta, puts it like this: “Sunday Funday can be anywhere as long as there’s alcohol.”

It’s not a gay celebration without a little drag. So there’s Drag in the Spring this Sunday with DJ Cody Nation at 5 Napkin. Princess Charles hosts with appearances by Bubba D. Licious, Brent Star, EJ Aviance and Alissah Brooks. With a 4 p.m. start, it’s Prime Time for Sunday Funday, yet you’ve still got plenty of time to hit your favorite bar after.

Hey, what about the lesbians?

They party on Sunday Funday, too. The ladies of My Sister’s Room kicked off their spin on Sunday Funday earlier this month. What fuels an afternoon of fun better than $3 domestic beers, a $3 menu and a huge outdoor deck that seats 70 people? Exactly. But wait, there’s more. In addition to brunch, free pool (2 p.m. to 6 p.m.) and karaoke, Brent Star and friends arrive at 9:30 p.m. for a show of camp drag and comedy. Chase Daniels, the bar's longtime emcee and now co-owner with partner Jami Siden, explains Sunday Funday's appeal to lesbians. "It's a time to eat good food and hang out with friends."

I got wasted on Saturday. How early does Sunday Funday start?

That’s okay. Some folks incorporate brunch into their Sunday Funday and others don’t. Ellis’ official Sunday Funday doesn’t offer brunch, worried that too many mimosas and Bloody Marys would peak his day way too early. But Adam Bland -- that’s him on the right in the top photo -- says he and friends gather for brunch at a pool or an outdoor space as a warm-up to recap thy mayhem of their Friday and Saturday nightlife. “Once everyone has somewhat recovered, we head to our usual spots,” Bland says. For his crew that means Blake’s, which is where we snapped the photo of him with friend Ryan Hartkopp (left) a few weeks ago.

Really, there are t-shirts? Really?

Bland, Hartkopp and friends sport blue t-shirts emblazoned with “Sunday Funday” in yellow. It’s branding. What’s the point in creating a new holigay if you can’t look cute (and purposeful) while doing so. Bland tipped us off to his secret, though. Their tees came from Urban Outfitters and you’re too late. We checked. They are sold out. Sorry Brent Star, Lynn Barfield and Chase Daniels.

How do I keep Sunday Funday from turning into Messy Monday?

Yes, work the day after. Barfield says eat as you drink. “I don’t want to have to kick anyone out for getting too tipsy because they didn’t eat,” she says. Don’t test her, queen. Pace yourself, warns Brent Star. “You’re supposed to be completely chill because the very next day is the beginning of a five day work week.” And if all else fails, keep in mind the guilt you’ll face when mom finds out. Ellis offers this note of caution. “Sunday Funday is all about the daytime, but once the sun starts to set that’s when the feelings of guilt start to come in, so it’s time to head home. My mom sill doesn’t understand it. Whenever I show up for Sunday night dinner a little cockeyed, I can definitely feel some judgment.”

Just in case, here’s the best pitch we’ve got for Sunday Funday. From Barfield: “Sunday Funday means friends, good food, laughter and hot boys. I don't know about anyone else, but Midtown gets just a bit prettier on Sundays.”