What happens if it rains on Joining Hearts? 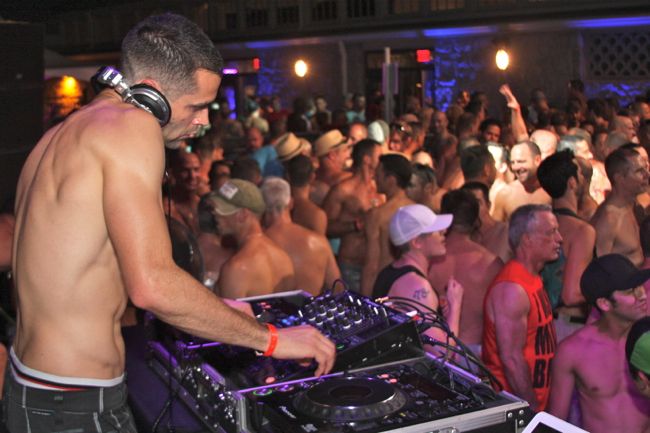 What happens if it rains on the biggest, gayest pool party fundraiser of the summer? Girl, please. The more than 200 volunteers pulling together Saturday’s Joining Hearts 25 got you covered. After all, this party must go on.

The gay hits the fan for Joining Hearts Weekend and organizers of the main event, a benefit for AID Atlanta and Jerusalem House, say they’ve got contingency plans for foul weather. In more than two decades of hosting this event, rain hasn’t spoiled it yet, says Events Director Wes Berry.

But if the string of violent thunderstorms making regular appearances in Atlanta in the last two weeks finally do drop some water on Joining Hearts, think canopies and tents. In other words, reflect back four years to Joining Hearts 21 and the pieces put in place then to prepare for rain.

“We are hoping for all sunshine but we’re prepared if it’s not,” says Berry, who’s spending his Friday at the Piedmont Park pool overseeing setup for the event.

Organizers are adding a canopy and tent to the deck that juts out from the bathhouse and traditionally plays host to the DJs and dance floor. That’s a good thing. Weather forecasts call for a 40 percent chance of rain and a continuation of the pop-up storms that have sparked damage across metro Atlanta in recent days.

“The canopy and tent will give us the whole inside and outside dance area. The only portion that will not be covered is the pool and deck and some of the side patios,” Berry said.

If any storms hit and turn intense, Berry says they’ll urge the dancing queens – the sold out crowd is expected to top 1,000 people — indoors until the storms pass.

“Obviously safety is our first concern. If it is a lightning storm, we would expect people to come inside,” Berry says.

Organizers have been working with vendors to erect the tents and make plans to seamlessly move the DJ and sound equipment inside while keeping the beats thumping. It is, after all, a gay party.

“It has never actually rained. We have had forecasts that called for rain that we’ve prepared for in the past. But knock on wood, it has never rained,” Berry says. “The show will go on.”

Joining Hearts 25 is part of a packed weekend of nightlife. Map it all out with our look at the best gay things to do this weekend.