What gay issue really ticks you off? 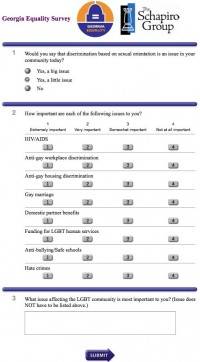 National gay rights groups often get slapped with the criticism that they pull resources out of an area, funnel it to their faraway headquarters and provide little, if anything, in return. Or they use the cash to focus on issues critics say are out-of-touch with the day-to-day realities of living life as an LGBT person.

To combat that, Georgia Equality is conducting a brief survey of gay folks across the state. The organization wants a better feel of what issues its constituents say are important to the fight for equality.

Respondents weigh in on whether anti-gay bias is an issue in their community and then rank eight LGBT issues as “extremely important,” “very important,” “somewhat important” or “not at all important.” The issues: HIV, workplace discrimination, housing discrimination, gay marriage, domestic partner benefits, funding for LGBT human services, bullying in schools and hate crimes.

If that’s not enough, the survey also allows you to write in the issue you argue is the most important.

So, take a minute or two to provide your feedback. Georgia Equality makes it easy and doesn’t event even ask for cash when you’re done.