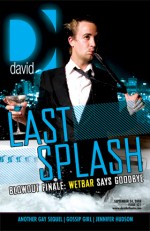 Another Atlanta gay bar closes its doors this weekend.

WETbar dries out this weekend with a two-night celebration calling an end to the Spring Street venue that opened with a flourish three years ago. To make matters even more interesting, there’s now a celebrity buzz with events at the club on Friday.

DJ Samantha Ronson, Lindsay Lohan’s newly confirmed girlfriend, spins tonight at WETbar and gay boys everywhere are atwitter that Lohan might make an appearance. WETbar officials have to love that — the place needs all the buzz it can generate.

This take from gay nightlife mag David, which focused on WETbar for its cover story this week:

WETbar soaks Atlanta one last time with big-name talent, a packed dance floor and stylish hotties before what was once Atlanta’s chicest gay bar locks its doors for good. DJ Samantha Ronson takes the tables on Sept. 26, and Billy Carroll, the DJ who opened the club in 2005, appropriately brings us full circle with the final set on Sept. 27.

WETbar’s closure marks the end of a long, perplexing run by the nightclub at 10th and Spring Streets. Several generations of managers pumped thousands of dollars into the club’s décor and entertainment over the past couple of years, transforming WETbar into one of the sleekest nightspots in Atlanta, gay or straight.

Despite the glamour, the nightspot struggled to attract regular crowds throughout the week for new ventures like drag shows; eventually even signature WETbar events like College Night began to lose steam, and gay patrons began to murmur about WETbar beginning to chase heterosexual crowds.

The bar’s general manager recently complained to Southern Voice that WETbar’s closing was due to the slow economy, the city’s roll back of bar hours a few years ago and the confusion over whether the venue catered to gays, straights, both or neither.

The bar worked to diversify its clientele when it partnered with promoter Liquefied this spring. The party production team drew a “mixed crowd” by offering a wider array of talent, coupled with decidedly straight advertisements on WETbar’s website. The special nights fed speculation that the club had changed format. Eventually, the club settled on different nights for different crowds.