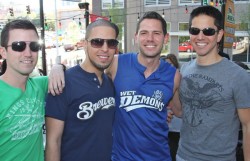 The Wet Demons — as well-known for their on-the-field performance on the softball diamond as their packed off-the-field parties – took to the patio of Joe’s on Juniper Saturday for their annual start-of-the-season bash.

The 5th Annual Spring Fling Beer Bust had plenty of beer and plenty of boys taking advantage of the warm and sunny spring day. An easy $10 bought party-goers all the beer they could consume, the tunes of DJ Travis Roache, raffle prizes and Jell-O shots. The event raises funds for the team, which competes in the Open C Division of the Hotlanta Softball League. 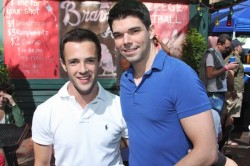 The Wet Demons are off to a sluggish start this season, opening with a 2-2 record. The team was one of eight men’s teams from HSL to compete in the Gay Softball World Series last year, though no men’s team has captured a title there since the Wet Demons and Venom did so in 2007.

Last season, the Wet Demons off-the-field performances included a season-opening beer bash, a shirtless car wash, another beer bust in June and one to close the season in July. They tapped the kegs once more in August before heading to the World Series.