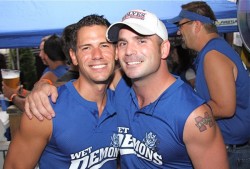 With one last beer bust of the summer softball season, the Wet Demons raised a little money on Saturday and then headed to the Gay Softball World Series with seven other teams from the Hotlanta Softball League.

The Wet Demons have found particular success with their beer bust format this season, opening the season with one in March, another in June and a season-ending one in July. 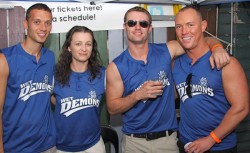 And they stripped down to wash cars during a fundraiser July 31. Think “Baywatch: The Gay Edition.”

So the team closed their fundraising on Saturday at Joe’s and then scooted off to Columbus, Ohio for the World Series. They are joining seven other HSL teams — Venom, Sluggers, Hitmob, Crew, Avengers C, Pink Cadets and Avengers D — at the national competition, which opened play on Tuesday. The Wet Demons and the Venom won World Series titles in 2007, the last HSL men’s teams to do so.

HSL closed its season on July 31 with a cook out and trophy presentation at the Eagle.