Westboro Baptist Church to protest at Super Bowl in Atlanta 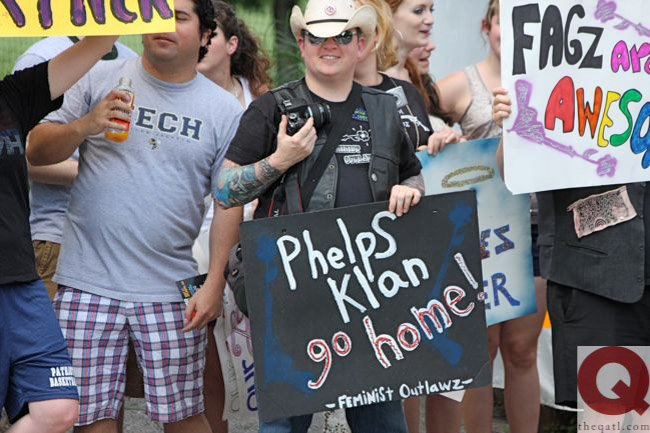 Members of the anti-LGBTQ hate group Westboro Baptist Church will hold a series of protests at the Super Bowl in Atlanta and at several North Georgia churches on Feb. 3.

The group will start the day protesting in half-hour intervals on Super Bowl Sunday at six Gainesville churches. Then they will head for Atlanta for a protest outside Mercedes-Benz Stadium from 3 p.m. to 5 p.m., according to a “picketing schedule” on Westboro’s website. The Super Bowl kicks off at 6:30 p.m.

“America has sold out, lock stock and barrel to the sodomites, while they hide behind not causing ‘offence’[sic] and being ‘tolerant.’ Shame. Great shame!” the Topeka, Kan.-based group said in a news release.

The group plans to protest homosexuality and marriage equality, according to The Gainesville Times.

In a letter dated Jan. 15 addressed to Gainesville Police Chief Carol Martin, Rebecca Phelps-Davis, ostensibly a lawyer representing Westboro, writes that the motive for their visit is “for public demonstration/outdoor religious services regarding the judgment of God with respect to the dangers of promoting homosexuality, same-sex marriage, the filthy manner of life and idol-worshipping of this nation.”

Rev. Dr. Stuart Higginbotham of Grace Episcopal Church posted a YouTube video on Jan. 17 saying the church is “what I believe a mischaracterization of the gospel.” Higginbotham added that they will ring the church bells continuously during the protest to “drown out the hate.”

Westboro plans on protesting at the Grammy Awards, the Oscars and an Elton John concert in Kansas City, Mo., in February, according to the group’s website.

Westboro was met with hundreds of counter-protesters (top photo) during a visit to Atlanta in 2010.