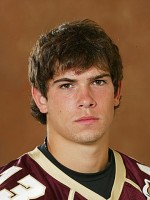 He’s one of just two players in the history of Division I-A college football to pass for 3,000 yards and rush for 1,000 in the same season.

Yeah, yeah. That’s all nice and good. But when Dan LeFevour comes to Athens on Saturday, they’ll be at least a few fans checking out his 6-foot-3-inch, 229-pound frame. He’s a hunk.

He’s leading his Central Michigan teammates against the No. 2 Georgia Bulldogs, drawing comparisons to Gator QB (and fellow hottie) Tim Tebow and winner of the Heisman Trophy. School officials think they’ve got a live one in LeFevour and spent $50,000 to plaster a 30-by-60 billboard of him on the back of the scoreboard at Detroit’s Comerica Park.

His larger-than-life likeness stands next to these words: “High Octane Offense. More Miles Per Game. Champions Come Standard at CMU.”

But tread carefully, young Chippewa. Another QB in the Heisman running who got the billboard treatment, Joey Harrington while at the University of Oregon, had his sexy likeness plastered across a building in Times Square. He didn’t win and went on to a lackluster NFL career, most recently getting cut by the Atlanta Falcons last week. (And picked up by the Baltimore Ravens on Monday.) 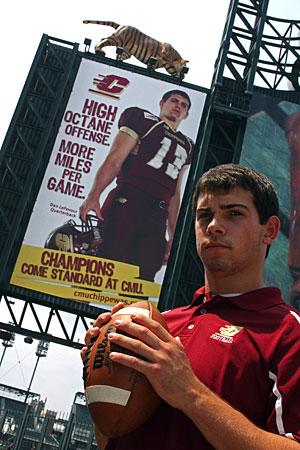